If you’ve put motion capture technology into the category of has-been, you’re wrong! 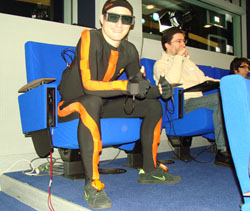 After seeing Nicolas prance around DS Campus in this flashy black and orange mocap suit enough times, I got curious and decided it was time for an interview.  Normally Dassault Systèmes doesn’t do has-been, so why motion capture?

I ended up chatting with Nicolas Serikoff (Mr. Flashy) and Benoit Marini about their work with motion capture and experiential 3D.  Here’s what I asked them: 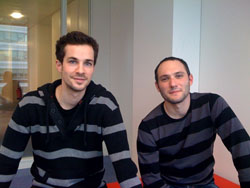 Q1:  Motion capture technology has been around awhile.  Can we still consider it innovative?

A1:  It depends.  There are two goals with motion capture.  One is to record movement for later use, like for a video game.  The other is for live shows.  We’re using it for live shows and there are definitely innovations for this application.  What’s most innovative is that now mocap is real-time, mobile and quick.

Before the set-up for motion capture was really heavy.  Ten years ago you really needed heavy hardware that constrained the actors.  Today we just need a very light and easy to put on and wear suit.  It’s just like putting on a running suit with 8 AAA batteries in the back and wires attached.  You forget about the sensors in a few minutes.  You can move very freely, jump and sit.  You can still act like you normally do.

The hardware is still evolving.  You can see that new motion capture is coming from cameras.

Another thing is the sensors.  Today they stop at the wrist, ankle and neck.  So for hands, fingers, toes and facial expressions, since the suit can’t track these we have to add another layer to add emotion and extra movement.

A3:  Yes technically, but for our purpose we didn’t t use the mocap connected directly to 3DVIA.  We opted to first send the data to a software that acts as a bridge and sends the data to Virtools.  Virtools is “listening” and applies the data to the digital characters.  Virtools assimulates the information.  This is quite convenient because we can have one PC connected to the mocap that can talk to 10 other PCs.  We can also have two or several mocap characters that are talking to one Virtools.  So Virtools is good for lots of different configurations.

Q4:  What role did motion capture play in the promotion of Minimoys, and how did the public react to it?

A4:  Our goal was to create for the first time a real-time event at the end of the film’s promotion in a regular movie theater.  We can now transform any digital theater very quickly into a 3D stereoscopic virtual reality center with a lot of interactivity between the audience and immersive virtual worlds. We wanted to create interaction between the animated film characters from Luc Besson’s movie and the kids sitting in the theater.  Some of the kids were on stage asking questions to Maltazard who was answering live. The actor’s voice was analyzed live and interpreted by 3DVIA Virtools in order to have a perfect lipsynch. We were also adding emotions on Maltazard’s face live.  It worked very well, and believe me, kids  wouldn’t have wanted to ask the characters questions if it wasn’t believable for them.

Q5:  How do you think people will be surprised by motion capture in the future?

A5:  Live, interactive shows will become more and more surprising.  Motion capture will be part of this, but you can also think about it as the public, getting more of their involvement.  The strong conviction is that regular neighborhood movie cinemas will be equipped with digital projectors in order to display 3-D movies.  We are working on the next generation interactive software and we will add to the stereoscopic  3-D effect live interaction for new kind of concepts….

—
You may enjoy this behind-the-scenes video of the Minimoys real-time show mentioned in the interview.  You’ll see the actors behind the Minimoys characters plus mocap in action.  Note English subtitles.

So, are you convinced that mocap falls in the innovative category?  Why, or why not?