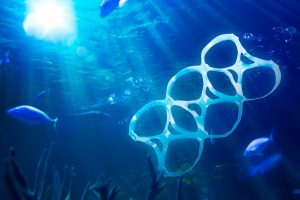 Back in March, Marco Vega, the chief strategy officer at New York advertising agency We Believers, got a text from his co-founder, Gustavo Lauría. Lauría had been supervising a photography shoot, and after the 20-or-so person production team packed up for the day, heaps of trash were left behind. “The amount of plastic bags that were left behind were just too big to ignore,” Vega says. “[Lauría] texted me that night saying ‘if there is one thing we need to pull our heads together on, it’s [to find out] what is the one thing we need to do, to minimize plastic?’ ”

Committed to the idea, the ad men reached out to Saltwater Brewery, a craft beer company in Delray Beach, Florida, that has a history of donating to conservation non-profits. They offered a proposition, to collaborate and create a compostable piece of packaging. Saltwater accepted, and the two companies then partnered with a small team of engineers, from about an hour outside of Mexico City, who are exploring alternative materials for packaging. Three months later, the three teams had it: a pale brown, biodegradable, digestible, six-pack ring that looped snugly around Saltwater Brewery’s cans of beer.

We Believers and Saltwater Brewery built their packaging primarily out of the malted wheat and barley that gets left over from the beer-brewing process. Initially, Vega says, they thought they could use a seaweed derivative. It turned out to be too brittle, and would break during manufacturing tests. Plus, “you have to then source seaweed to create the packaging, so quickly we are going to find ourselves in a bigger problem than the one we’re in,” Vega says. “Now you start to become a predator for seaweed.” Wheat and barley don’t present the same conundrum. In fact, it’s the opposite: “A lot of brewers have worked hard to get rid of the stuff,” says Chris Gove, Saltwater Brewery’s president, of the leftover grain. By using it for packaging, however, there’s “a cyclical, scalable solution that also gives back. So instead of buying the materials twice, we’re using the materials that would go to waste.” The material even retains some of its nutrients, which is good, because the package was designed to be edible to the sea animals who might eat it.

Both parties are secretive about exactly how they made their six-pack ring, but Gove says they’ve been working with 3D-printed molds. Soon, they plan on having an aluminum mold that will let Saltwater Brewery ramp up production. They’ve printed 500 prototypes so far, and over the next three or four months, Gove says, they expect to have a batch of 400,000 six-pack rings.

The problem of plastic pollution is acute, particularly in the oceans. A paper from 2014 suggested that there are a whopping 5 trillion pieces of plastic floating in the ocean, and it’s safe to assume that many of those pieces were once packaging. This has widespread pitfalls. Those range from the deaths of marine animals who try to eat plastic, to ocean acidification caused by carbon dioxide in the water, which can severely harm human health and the fishing and shellfish industries. For that reason, we can expect to see more initiatives like the one from We Believers and Saltwater Brewery in the near future.

Bio-based packaging isn’t new—plenty of consumers have encountered compostable cutlery and the like at green-minded restaurants—but it had two big moments this year. One came in April, when the annual Lexus Design Awards awarded its first-place prize to Amam, a three-person design team in Japan that’s using a seaweed-based material to develop a zero-waste packaging solution. Amam’s product is called Agar Plasticity. Agar is a gelatinous substance that’s derived from algae, and in Japan, it’s often used in sweets, and you can buy it right off the shelf.

That’s how the Amam designers got their hands on the agar. “When we visited a local supermarket in Tokyo, we found agar and were attracted by its material qualities—delicacy, crispness, and airy-ness,” says Kosuke Araki, one of the Amam designers. Stores sell agar in block, flake, and powder form; Amam uses it in powder form. To convert that powder into a plastic packaging substitute, Araki says they create a liquid agar solution, and freeze it in a mold. Achieving the right degree of cushioning required a great deal of trial and error during Amam’s early days, but by April, they had a prototype. Araki used the agar box to ship a glass perfume bottle to Milan, where he would be traveling for Milan Design Week. Upon arrival, the perfume bottle was intact.

Amam’s efforts are still nascent. “What we can produce now is something functional yet a bit like craft,” says Araki of the rough-hewn quality of the packaging. He adds that he and his design partners are still using their personal freezers to test new pieces of Agar Plasticity. Support from other industries and the science community will help gain momentum, Araki says.

Halfway around the world, in Sweden, a bigger, broader bio-based packaging initiative is in the works. This is the second of the aforementioned “two big moments,” and it’s happening at the headquarters of IKEA of Sweden AB. In February, IKEA announced that it would begin to explore mushroom-based packaging, to replace EPS-based packaging, which doesn’t recycle or break down. IKEA is currently working with Ecovative, a biomaterials company in upstate New York, on early prototypes.

Mushroom-based packaging consists primarily of mycelium, a fiber that grows at the root of a fungus. The material acts as a natural binder for other more stalwart materials, like straws from corn, that can form the frame of a piece of packaging. Puneet Trehan, a programme manager in the new business and innovation division of IKEA, describes the design process as putting the inoculated material—the mycelium fibers and corn straws—into a mold, which then need five to seven days of growth time. After that, the newly shaped material gets baked, to suppress further growth. “Then, the packaging is ready.”

Mycelium products are known to be light and durable—both are crucial qualities for packaging material. The lightweightness, especially, can help companies offset their environmental footprint. Plus, today, there are ways to test new materials to ensure that reduced weight doesn’t compromise a product’s viability to make it through the supply chain. Consider Dassault Systèmes’s virtual testing: the program can digitally simulate how a design will behave from blow-molding to labeling to capping to palleting. These small steps can save massive amounts of waste in the end, given the amount of material a company like IKEA needs. “We were using a couple of thousand tons of EPS per year,” Trehan says of the furniture company, before it decided to move away from EPS in packaging. These are small, incremental beginnings for bio-based packaging—but they are, indeed, steps. “Unfortunately, as a human race we have failed in recycling,” Vega says of the need for alternatives to plastic packaging. Luckily, bio-based packaging is coming into its own. “I think it’s at the very forefront.”