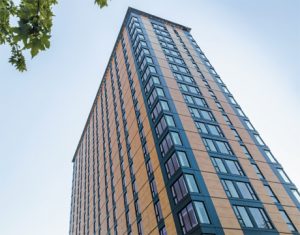 The ambition to change the construction industry is what drives the growing Canadian company CadMakers. Using virtual design and construction (VDC) they help contractors build in a smarter way, by pioneering innovations in building materials, design collaboration and construction processes.

One of CadMakers’ projects is Brock Commons – Tallwood House, home to over 400 University of British Columbia students and an example for faster construction, lower cost and greater environmental sustainability as well as being the tallest mass timber building in North America. CadMakers served as the virtual general contractor, working closely with all the stakeholders, including designers, construction management, and project management.

Usually, the various teams involved in such a project would all use their own software. As a consequence, problems of waste and conflicts due to inconsistent information arise, which are common issues for the construction industry.

Using the 3DEXPERIENCE® platform on the cloud CadMakers incorporated all the data from the various project contributors into one place, so it could be viewed anytime, anywhere by all users. By adapting modern technologies like 3D modeling and simulation into one single platform, they were able to avoid many common coordination challenges and miscommunications between stakeholders.

First of its kind

The Tallwood House project was completed three months ahead of schedule by combining prefabricated materials, collaborative processes and advance problem-solving. It is the first building of its kind and  the time and cost savings can serve as an example to the industry of a  new way of building with less waste, faster construction and greater environmental sustainability.

Want to learn more about how CadMakers works to transform the construction industry?  You’ve got two options!