A fleet of cars are racing 3,021 kilometers (1,877 miles) across Australia this week powered by nothing except solar energy. Among them is a car from Blue Sky Solar which was designed using Dassault Systèmes’ 3DEXPERIENCE Platform.

Thirty-eight teams from 22 countries competing in the World Solar Challenge departed Darwin on Sunday the 6th and are expected to arrive in Adelaide Sunday the 13th. Vehicles must be highly efficient to both make the long trek and to make it in the fastest time. 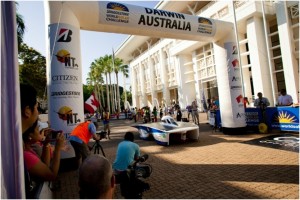 This was the first generation car on which we used the 3DEXPERIENCE Platform. Not only did it help us collaborate better and improve work flow tremendously, it was critical to us being able to design and deliver the vehicle so quickly.

CATIA allowed us to fully integrate the systems in the vehicle and gave us the flexibility to design a world-class aero body while SIMULIA highlighted potential problems early in the design process and helped us avoid over-design.

3DEXPERIENCE design and realistic simulation apps allowed the Blue Sky Solar Car team to work on all their car’s systems under one interface – including mechanical, electrical and aerobody – from the first concept all the way through to manufacturing. The team deployed DELMIA’s Human Builder and virtual manikin applications in order to visualize ergonomics and driver comfort, and even identify and remedy flawed calculations in the design phase. SIMULIA’s advanced simulation technology aided in further validating the design intent – an analysis that had previously been done using only rudimentary hand calculations.

After three days the Blue Sky Solar Car team is in 9th place. You can track the vehicle here.

Watch “See You at the Finish Line”: