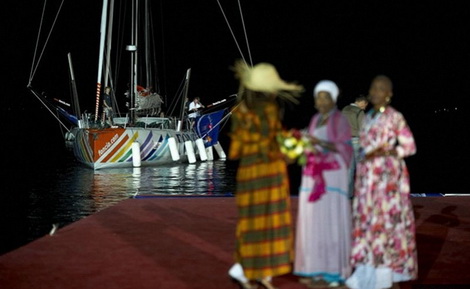 Michel Desjoyeaux, the skipper of the 60ft. FONCIA monohull, is known to take music with him when he’s sailing. I don’t know whether he brought that song with him, but no doubt that the wind was the great issue during this 9th Route du Rhum – la Banque Postale.

Basically, it goes like this: when you’re crossing the Atlantic, you have to bypass the Azores High, a high pressure zone where there’s little or no wind. And of course there are two paths you can go by: North or South. And unlike what another song goes (Yes there are two paths you can go by, but in the long run, there’s still time to change the road you’re on – Stairway to Heaven by Led Zeppelin), this is a strategic choice that cannot be changed during the Route du Rhum.

While most monohulls chose the North road, Michel (along with Arnaud Boissières) chose the South road, the good old Trade winds road.

Unlike the other boat categories, the IMOCA skippers are on their own with the weather forecasts. They are not allowed to be helped by their team ashore, it ‘s strictly forbidden to even allude to the weather and wind forecasts when the skipper and the team communicate. Therefore, the skipper must get the weather forecasts and try to figure out what’s going to happen all by himself, while still skipping the boat of course. A great challenge!

Well, this year it seems Aeolus was in a rather tongue-in-cheek mood, as the wind forecasts didn’t match reality at all. While the northern monohulls had to face hard weather and sea conditions, the two southerners didn’t find the expected Trade winds, which prevented Michel to fight for the fist places. Who knows, but he might have another Dylan’s song on his mind: Idiot Wind …

Anyway, the boat went fine, Michel hadn’t any problem with it (I opened the toolbox just once for a small allen key to tighten a small screw on the rudder) , and when he finally found some decent Trade winds, he fought til the end, finally arriving this morning in 6th position after 15 days, 13 hours and 37 minutes at an average speed of 9.47 knots.

As he told himself during the race, a beautiful boat and Michel’s great experience may not be enough if you don’t find the good wind conditions. A good reminder that Nature remains stronger than all our technical excellence and hunger for victory…

Anyway, congratulations to Michel for his race in those rather quirky conditions and on to his next challenge: the Barcelona World Race which starts on December 31st! 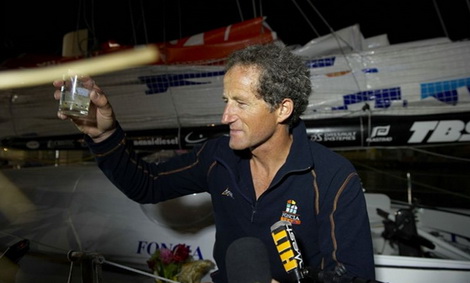 You can see Michel enjoying the traditional Ti’Punch welcoming the skippers in Pointe-à-Pitre. And as we began this post with a song, let’s close it with an appropriate sea shanty: