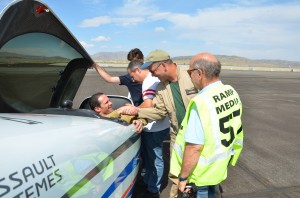 The Reno National Air Races are the fastest races in the world. Aircrafts compete in breathtaking races 50 ft above the ground, driven by the famous motto: “Go fast, fly low, turn left!”

An american specialty, the only foreign victory ever was French: Michel Detroyat way back in 1936 on a Caudron with a Renault engine.

A candidate of choice for the Passion for Innovation Program, which welcomed the Team, providing them with CATIA, SIMULIA and Dassault Systèmes experts’ support. Read the full story here.

For their first participation in Reno this year, the Team established on wednesday a whole set of World Premières :

– and above all, first diesel-powered aircraft victory and in his first race!

This first victory rewards the skills, involvement and passion of the whole Team and the excellence of French technologies, including our 3D design and simulation solutions, the SMA innovative diesel-cycle aero-engine and the perfect intergration of all those elements in the NXT airframe thanks to the Passion for Innovation Program.

Last but not least, congratulations to the pilot, French Air Force Captain Christophe Delbos. Usually a Mirage 2000 fighter pilot, “Bobos” (his official pilot nickname) made a perfect race. Diving on the first pylon like an eagle, he grabbed the race first position right from the start and kept it during the race six laps! According to him, the aircraft went quite well, allowing him to fully concentrate on clean trajectories until he heard the “Race finished” announcement in his helmet.

Once a curiosity after his qualification, Big Frog is now one of the stars of those 2011 Reno Air Races. No doubt Michel Detroyat would be proud of his successors.

Gentlemen, you have a victory! May it be the first one of a long collection!