Excerpted from Expanding Authorship: Project Delivery in the Post-Digital Era by Adam Modesitt 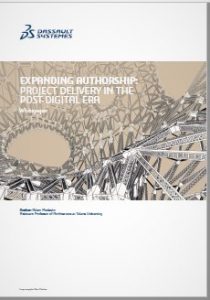 As radical as the digital transformation in AEC may be, it is not without precedent. The current trajectory continues longstanding patterns of historical development, in which project authorship in AEC is continually reshaped by new technologies. Throughout history, authorship transformation projects has been driven by the increasing encapsulation and translation of material construction information into immaterial forms.

Project authorship was once synonymous with the labor of construction. Buildings were authored exclusively by those involved in their material production. The idea that design authorship could be separated from construction emerged in the Italian Renaissance, in the work of the philosopher and architect Leon Battista Alberti (1404-1472). Alberti first understood that drawing could serve as a medium for communicating building layout information, supplanting the need to direct construction onsite. Drawings existed before Alberti, but had been instruments internal to the construction trades only. Alberti developed the modern notion of technical projection drawing—plan, section, elevation, and perspective—as medium for encoding and communicating building information previously managed by master-builder craftsmen. Alberti’s expansion of drawing as an instrument for project authorship separated the immaterial labor of design from the material labor of construction, forming the basis for AEC professions as we know them today.

It was not until four centuries later, however, in the French movement of Structural Rationalism, that the medium of projection drawing was expanded to incorporate not only building layout information but the logic of construction systems. Drawing as a medium for authoring construction systems. It was first advanced by the French architect, archaeologist, engineer, and theorist Eugène Viollet-le-Duc (1814-1879). Viollet-le-Duc’s prolific career ranged from renovating the great gothic monuments of France, including the Notre-Dame Cathedral, to engineering fortifications for the defense of Paris during Franco-Prussian war, to designing the Statue of Liberty’s internal structure (after his unexpected death, the final design was carried out by Gustave Eiffel). Throughout his career, Viollet-le-Duc maintained a fascination with abstracting and systematizing the principles of construction. To communicate construction processes, Viollet-le-Duc developed a form of representation with which we are now intimately familiar: the exploded architectural component drawing. Viollet-le-Duc’s tas-de-charge drawing, for example, illustrates the assembly of a gothic vault rib, revealing both its component parts and the internal logic that relates them. [Figure 1] In the drawing, individual stone blocks are represented in a state of suspended assembly and overlaid axes of symmetry, graphically communicating internal organizational and structural logic.

Viollet-le-Duc’s near contemporary, the French engineer and architectural historian Auguste Choisy (1841-1909), advanced drawing further. Similar to Viollet-le-Duc’s study of French gothic monuments, Choisy dedicated his career to studying the structural, assembly, and material systems of ancient Roman and Greek architecture. To communicate his analysis of the ancient ruins, Choisy developed a new form of drawing that combined into single representation multiple layers of information, including building layout, material assembly, and construction systems. Choisy’s Palatin drawing for example, from the Art de Bâtir Chez les Romains (Art of Building In the Romans), depicts the underside of a partially deconstructed Roman vault, a viewpoint no human observer could experience in the field. [Figure 2] The drawing integrates planimetric, sectional, and elevational information, and simultaneously reveals the vault’s material assembly, from the internal rib structure to the exterior brick cladding. From the drawing, it is possible to both obtain measurements and understand the vault’s construction. The integration of metrics into the drawing was made possible by eliminating foreshortening from the perspective, introducing into AEC a now universally familiar form of representation: the isometric projection.

Choisy and Viollet-le-Duc were not the first to use drawing to represent building information. Elevation, plan, section, and perspective drawings were standard tools of their contemporaries and predecessors. However, they were among the first to  expand drawing as a medium for authoring assembly and construction systems. Exploded component drawings and isometric projection encapsulated information formerly relegated to the craftsman-builder. Viollet-le-Duc and Choisy’s work enabled greater authorship of assembly and construction systems to occur separate from the act of construction, and further expanded the possibilities for project authorship.

Viollet-le-Duc and Choisy ushered in the modern era of AEC. Their work was cited as inspiration by a wide-range of modern architects, from Le Corbusier to Frank Lloyd Wright. Multilayered isometric projection drawings became instrumental to the development of modern buildings, and a primary medium for communicating and authoring construction information. In modern architecture, all forms of projection drawing began to work together as integrated instruments for conceiving and executing projects. AEC has now absorbed the inventions of Viollet-le-Duc and Choisy to the extent that it is difficult to imagine production without them. There exists in our current era striking parallels to Viollet-le-Duc and Choisy’s era. We find ourselves at a similar moment of inflection, in which digital tools are now as ubiquitous in our current era as drawing was to Choisy and Viollet-le-Duc’s eras, but have yet to be utilized and deployed for their full potential.

Tweet: Digital tools are now as ubiquitous in our current era as drawing was to Choisy and Viollet-le-Duc’s eras Expanding Authorship – Adam Modesitt @3DSAEC #3DEXPERIENCE https://ctt.ac/7f4uW+