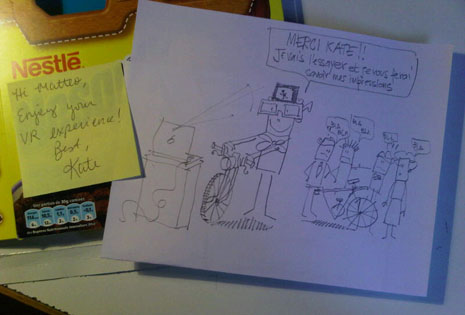 The following blogpost is by Matteo Mannuci, one of the lucky not-in-France recipients of a VR Chocapic cereal box.  Matteo is a practicing architect in Florence, Italy.  I’ve translated his French post to English, and the artwork and photos are his.  Molte grazie, Matteo! 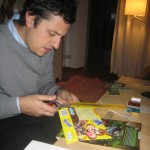 10 p.m.:  Tonight I spent time with one of my best friends and adventure buddies, Luca Aluffi, who also wore his own famous 3D glasses, sent to us by Kate!

Once we cut out and assembled our glasses, we threw ourselves into the game.  My super MacBook Pro had a problem with the plug-in, but with a bit of patience everything worked fine on Windows.  Luca’s little computer beat my powerful MacBook.

The game was excellent!!!! Blam, zam, bling!  The game is so well made and fun, it hypnotized us.  We laughed like children; while the game is very fun to play, it’s also fun to watch Luca playing . . .  Ah! Ah! Ah ! 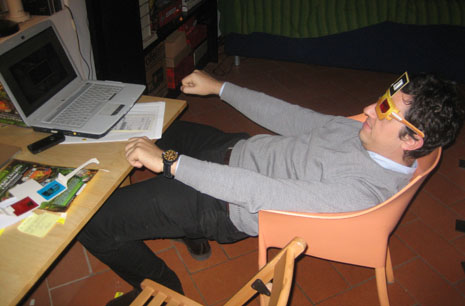 We tried all the levels, and I like the second one the best!!  Thanks again Kate.  We’re ready for the next 3D adventure!