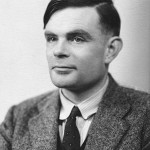 60 years ago died Alan Turing, a great mind considered to be the father of computer science. On this occasion, the University of Reading announced that they passed the famous Turing test (although leading to much debate and controversy as one could expect).

But Alan Turing is also known as playing a key role in the resolution of WWII, in particular his contribution to the effort at Bletchley Park. There, he created an incredibly efficient signal intelligence operation to simplify the reading of messages encrypted using the German Enigma Machine. The Allies had to know if Germany was taking the bait on the many deceptions being deployed, such as Operation Fortitude, a deception strategy to let Germans believe that the landings would actually happen in North of France instead of Normandy. As many other engineers who contributed to the incredible innovations of the D-Day, we should pay tribute to Turing for the same.

Of course, Alan Turing also has a special connection with us, as a scientific software company.

Put simply, Alan Turing’s test could be summed up in this quote:

A computer would deserve to be called intelligent if it could deceive a human into believing that it was human.

What I like in this definition is how it relies on human perception to assess whether a machine is declared intelligent or not. In fact, it has a lot of commonalities with 3DEXPERIENCE itself. Indeed, if you’d transpose this definition of artificial intelligence to realistic visualization and simulation, you’d end up in a definition of what a Lifelike Experience can be:

A visionary mind, Turing envisioned a digital world where computers could not only simulate lifelike experiences but could even be a part of those experiences, as he mentioned during a not well-known lecture broadcast on the BBC:

It might for instance be said that no machine could write good English, or that it could not be influenced by sex-appeal or smoke a pipe. I cannot offer any such comfort, for I believe that no such bounds can be set.