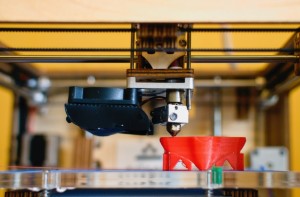 The global market for additive manufacturing (AM) grew 35% in 2014, as companies increasingly find new ways to use the process. AM builds up objects layer by layer, as opposed to conventional, or subtractive, manufacturing methods, which cut or grind down a solid piece to the desired form.

As a result, AM is capable of producing new shapes that would have been difficult to create using conventional methods. It can also fashion new internal architecture that’s hollow or contains lattices, instead of being solid. This not only reduces the amount of material used, it also makes the end product lighter. And it allows us to rethink design.

Additive technology has opened up the door for us to conceive shapes and designs,” says Joshua Mook, engineering manager, additive technologies, at General Electric Aviation in Cincinnati. “Shapes are now free, complexity is free, so we can go satisfy the physics and the shapes in the way they want to be satisfied.”

Cooling devices, such as car radiators or laser cooling systems, can now be designed with interior channels that aren’t possible when using conventional manufacturing tools. 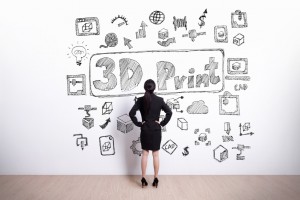 “Designers can take technologies that were mature before and now can add functionality,” says Matt Wraith, group leader, defense technologies engineering division, at the Lawrence Livermore National Laboratory in Livermore, California. “A good designer is going to think about the manufacturing process when designing a part, but you have [far] fewer restrictions with additive. It’s a challenge for some technical staff, because they have to forget all the things they learned in the past.”

The new mindset is leading designers to seek inspiration from nature rather than manmade structures.

“Historically we have handled problems like high loads by transferring some of the load to another member or out into the airplane,” Mr. Mook says. “All our solutions used to look like textbook solutions, with beams, right angles, things that are easy to cut.

AM is particularly suited to evolutionary structural optimization, a design idea from the 1990s based on removing non-load-bearing materials, allowing structures to be hollowed out as much as possible.

These new geometries can affect a material’s properties. 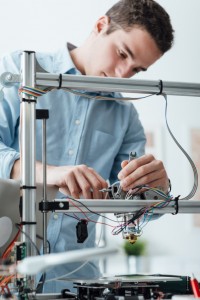 “In many cases, you go from molten to solid very quickly. That has negatives and positives. If you truly understand it you can use that to your advantage and generate materials that are stronger than in the past, like in a cast that solidifies very slowly. If you don’t understand it, it can lead to cracking and weakness,” Mr. Mook says. “Just as forging and casting are different, we treat AM materials differently from materials from other processes. We do extensive testing.”

Internal passageways also can alter a part’s performance. GE Aviation used AM to make a jet-engine fuel nozzle, which has many passageways for air, fuel and thermal isolation. “Fuel comes in ice-cold from the wing tanks,” Mr. Mook explains. “Inside the jet, it’s extremely hot. When you have extreme cold and extreme heat next to each other, it produces thermal stress. That has limited designs for a long time. Now, we can do a better job of getting fuel where we want it and air where we want it, and the parts can have longer lives.”

AM also offers the unique ability to change the density of a material within a single piece, though the technique is still at the research stage.

On a simpler level, AM is democratizing design. “You can reverse-engineer an item,” says Mr. Wraith of Livermore Lab.

If you have an existing part, you can just scan it. There’s no need to design it.”

Online databases contain open-source designs, while other designs can easily be bought.

“That’s the future,” Mr. Wraith says. “You download the design for a part and print it and you’re good to go.”