Earlier in 2014 you may have read about how SOLIDWORKS was used to design the sled for the United States four-man Bobsled team that won a Bronze medal at the Sochi Olympics. While we believe all our customers are winners having one that has won an Olympic medal is, we admit, rare and very exciting.

This week representatives of the Bo-Dyn Bobsled project, who make the sled, and sled’s driver, Steve Holcomb,  paid a visit to our North America headquarters in Waltham, Mass. to tell our employees about the win and the role SOLIDWORKS played in it.

And they brought a few things with them. 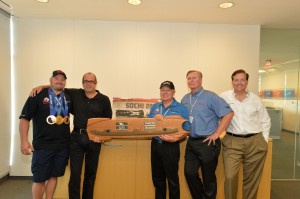 Bruno Latchague, Senior EVP, Americas Market, stands with Steve Holcomb and Geoff Bodine, the founder of Bo-Dyn, and a plaque presented to Dassault Systemes to thank the company for the support of the team. With them are Bo-Dyn’s Executive Director John Morgan and president John Vester.

As you can see in the picture above Steve Holcomb brought his Olympic medals – his Gold from the 2010 Vancouver games and his two Bronzes from Sochi. Here’s a closer look: 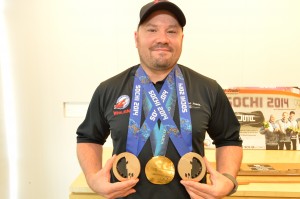 I had the chance to hold them and they are very heavy.

Bruno Latchague then introduced the Bo-Dyn team to our Americas employees who gave them a big round of applause. 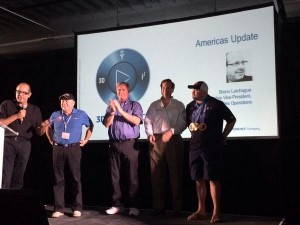 After a few words about medal winning run at the Olympics, Geoff Bodine presented Steve Holcomb with even more metal – his official Olympic ring designed by Jostens. 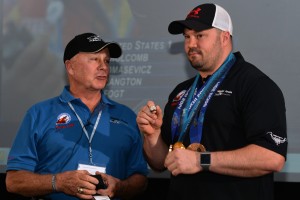 At the conclusion of the event Steve Holcomb  posed with numerous employees, including David Gadarian below, to give them the opportunity to hold the winning medal. 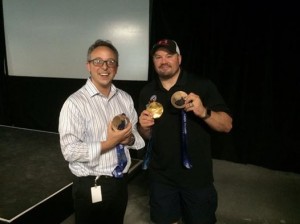