On May 28, PBS featured the documentary “D-Day’s Sunken Secrets” which includes and highlights work done by Dassault Systemes’ Passion for Innovation Institute. Earlier this month Dassault Systèmes, in association with WGBH Boston and the PBS science series NOVA recently hosted “A Tribute to the Engineering Minds of D-Day” at WGBH headquarters in Boston, Massachusetts not far from our headquarters in Waltham.  An audience of more than 200 dignitaries, veterans, Science, Technology, Engineering and Math (STEM) leaders and educators attended the event to see and discuss key technological and engineering innovations  used during D-Day and the Invasion of Normandy. The innovations will be featured in the two-hour NOVA production in association with MC4, LCL, Dassault Systèmes and Canopee-CNDP.

As part of  this 70th anniversary of D-Day, Dassault Systèmes’ Passion for Innovation Institute embarked on an ambitious 3D reconstruction project to safeguard blueprints, notes and government documents capturing the remarkable engineering achievements of D-Day. To preserve this valuable moment in history,  Dassault Systèmes created scientific and accurate 3D models of the following  war innovations:

During the event the attendees got a “sneak peek” from producer Paula Apsell, Senior Executive Producer, NOVA & Director of the WGBH Science Unit, of highlights from the documentary showing how NOVA as it joins an elite team as they carry out the most extensive survey ever done of the seabed bordering the legendary D-Day beachheads of Normandy, revealing the ingenious technology that helped the Allies overcome the German defenses and ultimately liberate Europe from the Nazis. 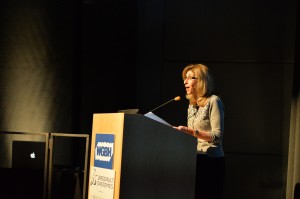 After a welcome by Sara Larsen, VP North America  Marketing and Communications, the Dassault Systemes Passion for Innovation Team showed attendees a 3D presentation that brought to life through 3D reconstruction, the Mulberry Harbor. 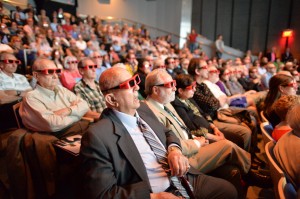 As today, only pieces of the Harbor remain requiring the Dassault Systèmes team to compile what remained of the original plans from the Royal Engineers Museum in London, the construction and maintenance manuals, the aerial photographs taken at the time and additional information provided by Tim Beckett, the son of Mulberry Harbor designer Allan Beckett, himself a marine engineer. Mr. Beckett was a guest of the event and with Nicolas Serikoff of the Dassault Systemes Passion for innovation team narrated a trip through the accurate, scientific 3D reconstruction of the Harbor which enabled him to see and experience his father’s critical work. 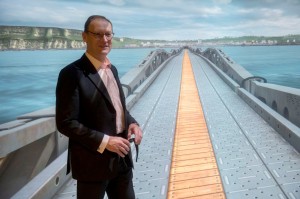 Following the video presentations Paula Apsell, hosted a lively Q&A with some key participants of the project: 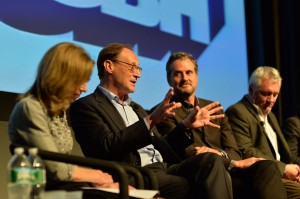 The audience was thoroughly engaged and if not for the refreshments ready to be served would have gone on for at least another half hour.

During the cocktail reception the attendees were able to get hands on experience with the 3D technology including the recreations of the Mulberry Harbor, Waco Glider and the Higgins LCVB. In its commitment to STEM education a number of attendees were invited to bring their middle and high school children to the event. 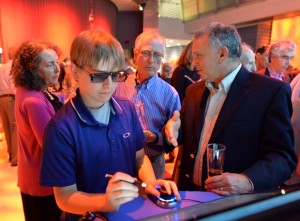 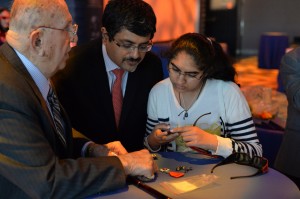 While the technology was engaging even more engaging were the veterans of World War II who were there on D-Day who were invited to attend the event. These veterans were given the “Legion of Honor” award by the French Government, the highest military decoration in France: 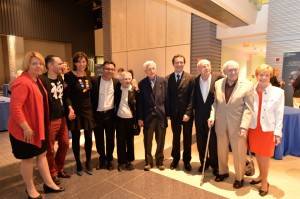 Several of the veterans posed with the team from Dassault  Systemes including from left Sara Larsen, Nicolas Serikoff, Marie-Pierre Aulas and Mehdi Tayoubi.

You can see more of the recreations and the project at the Dassault Systemes’ D-Day site.