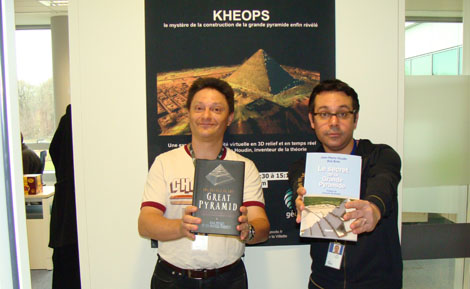 All these things have lead to two important discoveries:

Zoom back to Passion.

I’d like to introduce you to Richard. He’s the guy on the left of the above photo.

Under the direction of our Interactive and Experiential Marketing Director Mehdi Tayoubi (guy on the right), Richard manages Dassault Systèmes’ Passion for Innovation program. It was through the Passion for Innovation program that Jean-Pierre Houdin (said architect in black) was able to fully develop his internal ramp and counterweight theories, a process which lead to the scientific exploration/validation of the next question: why are there cracks in the King’s Chamber?

This is just one example of the exciting projects bubbling up from Dassault Systèmes “Passion” program. Next week Richard’s on deck at 3D Perspectives to share other passionate projects with you. So I thought it was only proper that I introduce him to you first (we southerners place high importance on introductions).

If you’d like to dig deeper into The Great Pyramid’s construction secrets, you may be interested to read the English or French book (we don’t get a sales %):

Bonus must-sees include the gorgeous trailers to the FR and ENG films on YouTube, as well as the interactive, immersive virtual reality show being featured at La Geode in Paris . Enjoy!