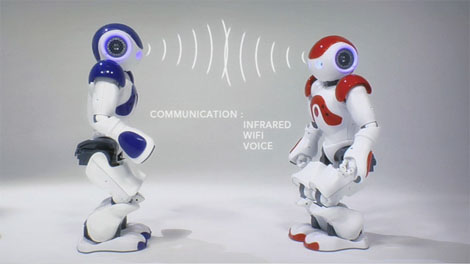 Although he could, Nao (also pronounced ‘now’) won’t be speaking at the upcoming National Innovation Directors Meetings.  Instead Noa’s maker Bruno Massonier will contribute to a discussion entitled “Product Conception for the General Public; Combining Low Cost and Very High Performance”.

Dassault Systèmes is one of the event’s partners, so I’ll be live blogging the first day.  Meanwhile I wanted to give you a taste for the innovators who will be present, starting with the President and Founder of Aldebaran Robotics.

Did you know the 21st century robotics industry will be more massive than the 20th century automotive industry?

Read the 5-question interview to learn why:

Q1.  In 2007, Albdebaran Robotic’s “Nao” robot was selected by the prestigious RoboCup organizing committee to replace Sony’s “Aibo” as the league standard robot.  How did your French start-up outsmart and beat the robotic giants?

BM: We were a very small company in 2007, with less than 20 people working for Aldebaran Robotics. I think that we prevailed thanks to these points: 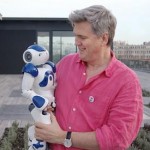 Among the robots presented to the RoboCup committee, Nao was the only humanoid. The RoboCup’s aim is to get a team of humanoid robots able to beat a human soccer team before 2050, and the choice of a humanoid seemed to be more convenient.

Moreover, as we started to design Nao with a mass market goal, we were able to offer Nao cheaper than any other opponent. And amongst these two advantages, even if Nao was still a prototype, it was the most advanced product showed in Atlanta.

From my point of view, the main error of our competitors was to develop a specific product for the RoboCup and trying to make this market profitable, while it is a marketing investment for us as we do not earn any money with the RoboCup.

Q2.      You’ve been quoted as saying the 21st century robotics industry will be even more massive and impactful than the 20th century automotive industry.  Why?

BM: Actually, the economic office of the UNO plans it. The survey says that in several years there will be as many robot units sold than TV screens. Just like the automotive industry, the robotics industry will be an incredible economic growth engine, creating millions of jobs and a lot of other connected industries like electrical motor, battery or even software and personal assistance.

The main reason for this is that the occidental populations are getting older and there won’t be enough active workers to take care of our old people. Robots won’t replace humans but they will be excellent tools to give back autonomy to dependent individuals.

Q3.      What innovations are missing to help the robotics industry leap to the future (robots everywhere for our personal assistance, entertainment and surveillance)?

BM: It is not really innovations we are lacking, but dedicated components. For example, two main electric motors exist. One of them is very cheap but limited to a few hours of usage, and mainly used for automatic car windows. The other is very robust but very expensive as well! Robotics will need a better mix between robustness and price. Another example is batteries, mainly developed for computers or phones. Robots will need more power, but for an equivalent weight.

Q4.       Do you use 3D software and collaborative research platforms to invent your products?  If so, how does this impact your innovation cycle?  If not, why?

BM: Of course, our mechatronics design team is fully equipped with your SolidWorks solution. It helps us a lot to work collaboratively as all the parts are shared on a single server and everyone may modify or integrate those parts. By the way, since there are very few robots that exist, we had to imagine new solutions, step by step, for our specific problematics and the simulation software included was more than helpful!

BM: As we are not a research lab but an engineering company that develops commercial products, I think that innovation, here at Aldebaran, is everything : We always designed Nao on a “Customer-driven” basis which means appropriate solution for specific problem, robust, functional and not expensive, to offer the best price to our customer.

Now tell me, what type of robot would you like to have in your home within the next few years?

(I know someone who just bought a robot vacuum cleaner.  She sets him loose and vroom!)