We have that festival here in Paris which is so awesome I thought I’d share it with you. It’s called “Futur en Seine” and it’s basically about the general public meeting innovative companies and researchers to imagine together what our future could look like.

Now you may think it’s about witches reading palms. Not quite. Actually we had the pleasure to see people like Yoichiro Kawaguchi whose ambition is to propose artistic but fully realistic 3D models of creatures which would appear in future planets. Of course, it is only predictions and if we won’t be able to check it until we actually visit these planets.

However, and that’s where it gets interesting for us, it is not only arty people who unleash their imagination. Kawagushi is so much into his ideas that he prepared a simulation environment to analyze interactions between the virtual creatures and the planet. Thus he makes sure these creatures can actually live – and thus potentially exist.

Again, it’s pretty far from the traditional scientific methods but when you think about it, art can definitely bring new ideas to engineering. That’s why we were then invited to round tables and seminars to talk about 3D as a media, define eco-design and explain collaborative communication. Topics such as serious gaming or sustainable innovation were of course at the very heart of the debate.

It’s pretty interesting to see how people are passionate about new technologies and their impact on our future: novices and professionals were equally excited by everything they saw! From complex demos from researchers to 3DVIA shows targeting the general public, they were all attracted by 3D and its future.

And you, how do you see our future?

PS: Another thing people loved was Exalead Labs and its Music Mashup! Ok it’s not 3D things but people still loved it! 😉 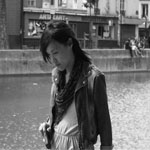 Brigitte is a member of the Digital Content Strategy Team

Latest posts by Brigitte (see all)