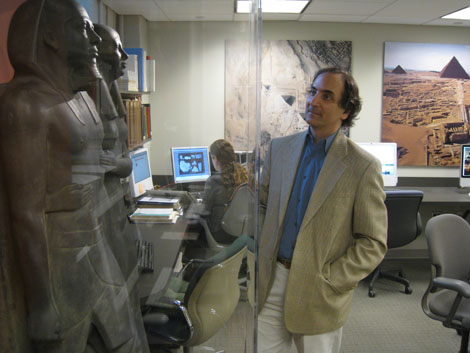 I must confess I got excited when I learned about Dassault Systèmes’ partnership with the Museum of Fine Arts, Boston.  The entire Giza Archives in 3D for educational and research experiential/interactive discoveries!

Who would have thought that the Khufu Revealed project would lead to this!?

Curious as I am, and of course thinking about you dear readers, I contacted Peter Der Manuelian, the Giza Archives Project Director at MFA Boston, who is also a Philip J. King Professor of Egyptology at Harvard University. Here’s what I asked Peter:

After you read the interview, check out the embedded 3DVIA Virtools flythrough video.  It’s a glimpse of the work-in-progress interactive application, showing certain tombs located at the Giza plateau. 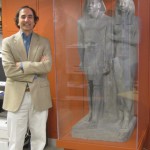 Q1:  There’s a lot to be excited about with the digitization of the Giza Archives Project, but what gets you the most jazzed?

PDM: Giza is a huge place, dug by many different expeditions over several decades. It’s impossible to get a coherent overview of so much archaeology! So the prospect of a fully immersive, real-time 3D model of the entire site would represent a huge breakthrough for us.

Imagine being able to go anywhere, above ground or below, to enter a decorated tomb chapel, or descend down a burial shaft to view a sarcophagus… The possibilities are limitless. And best of all is that, unlike your average video game, this Giza model is scientifically accurate.

Thanks to collaboration between the MFA and Dassault Systèmes, it is built upon real archaeological data: the old dig photos, drawings, plans, and notes of the original excavators. So that means we can virtually reconstruct original appearances, either in ancient times or during modern excavation times (our early 20th century).

The ceramics and statues will appear in their original locations from almost 5,000 years ago. The wall reliefs, paintings, and inscriptions—some now in museums around the world—will show up back on their original tombs walls, etc.

Q2:  Are there any unanswered questions about the Giza plateau that you hope the Giza 3D project will help answer? Can you give an example?

PDM: Since we can now restore walls, roofs, original colors, and put objects back in place, we can understand the original layout of Giza much better. What particularly interests me are the interrelationships between all the monuments. What was built first? What came later? How did the entire site develop? Answers to these questions help us date the monuments, and reconstruct Egyptian history.

And there are questions of engineering and organization. For example, all those burial shafts extending underground… how did the Egyptians decide where to put them, and how did they avoid crashing into neighboring shafts from earlier generations? Were there necropolis records or archives recording who built what, and where? How long did a tomb’s funerary cult remain in operation, before someone else came along to block access to it with a new tomb of his or her own?

Q3:  Which sector do you think will be most impacted by the project and why, research or education?

PDM: I would say that both scholarly research and general education will benefit immensely from the Giza 3D model. Scholars will be able to view the monuments in ways we never imagined, such as in different chronological layers, rather like peeling an onion. This allows for new research questions and new hypotheses.

Many thanks Peter for taking the time to answer my questions!

Stay tuned for updates on the Giza 3D project.

What do you think so far?