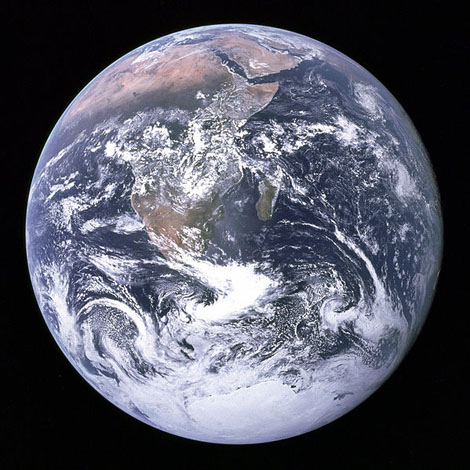 Actually it’s like the Superman of planes, ready to save our daily planet.

Solar Impulse, you know it?

Solar Impulse is a solar airplane, sporting 12,000 photovoltaic cells on its wings, which, like a plant, soaks up energy from the sun for power, but the power juices the four electric motors.

It’s like a giant bird, with a wingspan of an Airbus A340 (63 meters), but weighing only as much as a car, so light enough to surf on wind currents for miles and miles.

Today near Zurich Solar Impulse was unveiled to the public for the first time. Six years of hard work by 70 people, creating a true aerospace innovation, and just in time. We desperately need viable eco transportation solutions given the state of our planet.

According to the official Solar Impulse website, here’s the challenge:

In a world depending on fossil energies, the Solar Impulse project is a paradox, almost a provocation: it aims to have an airplane take off and fly autonomously, day and night, propelled uniquely by solar energy, right round the world without fuel or pollution. An unachievable goal without pushing back the current technological limits in all fields…

I just got off the phone with our PR Manager Virginie who was lucky enough to attend the unveiling. Her impressions:

Today marked a page in history. When everyone saw the aircraft, it was a WOW moment. The plane doesn’t look like any plane you can imagine. It’s very long, and very thin.

Virginie was impressed by the project’s “around the world” ambition, because:

There will only be one pilot in the plane at a time. And each pilot will take a shift of five days, during which he will fly NON-STOP. No sleep, just meditation and micro siestas.

That cockpit better be pretty darn comfortable! Well, not too comfy- don’t want any accidental dozes . . .

Did you know the engineers used Dassault Systèmes’ CATIA and ENOVIA Smarteam to design Solar Impulse? According to the press release:

Because Solar Impulse is a new and complex aerospace invention, it was critical for engineers to be able to test a wide range of design configurations, including various combinations of solar panels and lightweight composites structures. For example, Solar Impulse engineers used CATIA to define the best allocation of solar cells to comply with the energy specifications. The engineers also used CATIA for ergonomics analysis to optimize the aircraft pilot’s comfort in various positions.

Virginie told me that first flight tests will begin this fall, and that a second Solar Impulse will be built.

I should have photos taken at the event to publish in time for Monday, so stay tuned . . .

And if you were there for the unveiling, please share your impressions and any photos you took in the comments section! (I’ll try not to be jealous 😉 )

You can also see what people are saying about #solarimpulse on Twitter.