Workforce issues—namely, attracting and retaining top talent—has been on aerospace’s radar for years, prompting a growing number of companies to initiate programs mainly to satisfy their own immediate requirements and their needs over the longer term. But the problem of how to compete with other industries vying for the same STEM (science, technology, engineering and math) brainpower may be reaching a tipping point as more professional trade organizations with national and even international reach lend their weight to addressing one of the biggest challenges facing aerospace.

In the last decade or so, the industry’s human capital strategies have been largely fragmented, with countless uncoordinated initiatives designed to serve individual companies’ own self-interest. In recent months, at least one major professional group whose members include some non-U.S. companies with a large and growing North American presence is actively exploring what it can do to purposely bring structure and more focus to existing programs. In addition, two other organizations are studying how they could be part of the solution without duplicating what may be working regionally.

It’s about time the aerospace industry take its collective effort to a higher level, because the job of hiring people for technical and scientific positions is only going to get more challenging, according to industry leaders.

Historically the biggest competitors to aerospace for attracting and retaining STEM talent have included mainly the automotive industry, the oil and gas sector, biotech, and Wall Street, according to the Aerospace Industries Association. They continue to attract young professionals on the strength of exceptionally high starting salaries, the nature of the work, professional fulfillment, or some combination of the three.

But the list of attractive career paths is likely to increase to include potentially more fields with which aerospace may have to compete due to monumental advances in manufacturing technology. 3D printing combined with powerful software networks, machine learning and artificial intelligence almost certainly will revolutionize many sectors and perhaps create new ones with compelling career opportunities for top STEM talent.

Adding to the pressure many aerospace companies are feeling is the number of highly skilled aerospace employees currently eligible to retire or will be in the near future, according to the most recent annual workforce study by Aviation Week & Space Technology magazine. It’s common to hear engineering, manufacturing and R&D executives privately express dismay at the prospect of being unable to recruit the right talent in sufficient numbers to meet future needs as a result of the aging aerospace workforce.

Further exacerbating the industry’s challenge is low unemployment and the fact that the aerospace business is booming, with no letup in sight. Commercial aircraft production is at or near record production rates. Defense spending is healthy and demand for faster product development and a shorter innovation cycle is relentless. Commercial space is booming. Maintenance, repair and overhaul—which is becoming more technology-intensive all the time—also is growing rapidly. 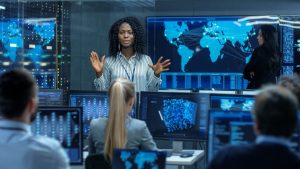 One way the industry could greatly help its cause is by doubling down on trying to attract more women and minorities. As a general rule, both groups are sorely under represented, as attendance at any large gathering of aerospace professionals will quickly attest. Ironically, and to the industry’s credit, four of the five largest aerospace/defense contractors are or will soon be led by women: Lockheed Marin; Boeing’s defense, space and security division; General Dynamics, and Northrop Grumman. While there’s no question that industry is making a more concerted effort, some hiring managers concede progress has been too slow and that companies need to invest more resources for specifically targeting women and minorities, according to the National Aeronautics Association.

With all of the rapid and exciting developments across a range of frontiers—unmanned aerial vehicles, electric and hybrid-electric propulsion systems, hypersonics, miniature satellites, human space exploration, supersonic and other next-generation commercial aircraft, the emergence of on-demand air taxi vehicles—aerospace professionals might wonder why any young person interested in a STEM-related career could resist the lure of aerospace.

Some industry leaders believe the time has come for aerospace to elevate its profile among the public and educate society as a whole—and young people in particular— that the sector has been responsible for many of the world’s most transformational innovations that have raised standards of living and advanced social progress around the world.