The tech world is moving at a breathtaking pace with our cars, our computers, our phones- all rapidly improving with expanded capabilities. Yet in many ways, innovation in commercial airplanes has not progressed much following the early promise of supersonic flight first introduced with the Concorde.

A new aviation start-up, Boom Supersonic, aims to bring supersonic travel back to commercial passengers, delivering flights at a cost equivalent to a business-class seat on a modern subsonic airliner. And a recently announced partnership between Boom Supersonic and Dassault Systèmes will advance the design and development of Overture, its Mach- 2.2 commercial airliner, with an aim to make supersonic travel mainstream and affordable.

The Concorde and Supersonic

Flashback to 1976 and the arrival of the supersonic passenger airliner, the Concorde. It looked like the beginning of a new age in travel, New York to London in a little over 3 hours – fly out that morning, connect for your overseas meeting, and be home that evening. The possibilities were immense. Yet despite the impressive engineering, supersonic commercial flights struggled to take off – at least metaphorically speaking. Due to the prohibitively expensive cost and limited routes – the Concorde often flew with just 1 out of 4 seats occupied before being retired in 2003. The question remains if the technology of supersonic flight can be revisited and improved upon.

We Have the Technology 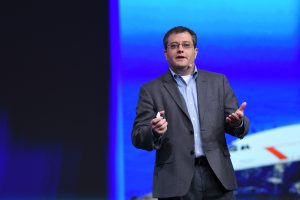 Josh Krall, Co-founder and VP of Technology at Boom Supersonic spoke at our recent 3DEXPERIENCE FORUM in Las Vegas. Krall reflected on the challenges of bringing the company’s vision to light, “jumping right into a certified airliner development program, that’s a tall order, we understand that. So we’ve been working on a technology demonstrator aircraft that we call XB-1 or baby boom. The XB-1 is a two-seater airplane designed to travel Mach 2.2 and demonstrate our team’s ability to build a supersonic airplane.”

Boom Supersonic is deploying Dassault Systèmes’ “Reinvent the Sky” industry solution on the 3DEXPERIENCE platform to support product development from concept through manufacturing and certification. This means development at an accelerated pace, faster time to market, with an increased focus on testing and safety.

Baby Boom aka the XB-1 is a ⅓ scale prototype of the aircraft that BOOM intends to release in the next few years – the Overture. Advanced carbon fiber composites, a refined delta wing platform, and an efficient variable-geometry propulsion system have been brought together through thousands of hours of testing and simulations. Krall spoke to the importance of BOOM’s partnership with Dassault Systèmes as they move forward,

“even in the conceptual design phase we’re just beginning, we already have worked with Dassault Systèmes to identify a large number of tools within the 3DEXPERIENCE platform… The fact that we can accomplish this vast scope all in one platform has dramatically simplified our processes.”

Vision for the Future

Boom’s aircraft also comes with a vision, not just of shorter travel times but of the long-term benefits of making a more accessible world. Blake Scholl, founder and CEO of Boom Supersonic recently spoke with Dassault Systèmes at the Paris Air Show. As Scholl states-

“If we can fly twice as fast, the world becomes twice as small, turning far off lands into familiar neighbors.”

Watch below and see Josh Krall’s full talk on Boom Supersonic’s vision for the future at the 2019 3DEXPERIENCE FORUM.