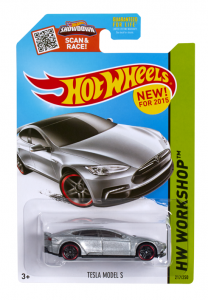 You can now own a $100,000 Tesla Model S, for only $1.09! It’s the all-electric, high-performance vehicle that’s ushering in a new era of auto transportation, so who wouldn’t want a deal like that?

If you think that sounds a little too good to be true, you’d be right. Most of us will have trouble fitting into this Tesla…because it’s a Hot Wheels car. Mattel and Tesla have partnered to create the Hot Wheels Tesla Model S, which can now be bought at toy stores across the country. According to Forbes, Mattel plans to produce 700,000 tiny Teslas.

So why is Dassault Systèmes so excited about this new Hot Wheels car? Because Telsa used our tools to create the original! Tesla used our ENOVIA V6 collaboration solution to allow for more efficient collaboration between their designers at all stages of the car’s development. They also utilized our CATIA platform to reach their innovative goals.

This isn’t the first time that Hot Wheels, a major auto manufactuer, and Dassault Systèmes have come together. As mentioned earlier this year, Ford created a record-breaking 12-foot loop for a Hot Wheels Mustang model using the same Dassault Systemes CATIA software they use to build their cars.

The new toy was revealed last week, at the Hot Wheels Garage in El Segundo. The event featured the real deal, a full-size Tesla for parents and kids alike to dream about. The new toy car is about 1/64th the size of the actual electric Tesla Model S, and fans can choose between a silver or red model. This is the second Hot Wheels car modeled around a Tesla…in 2008, the Mattel made its own version of the Tesla Roadster, but designers from both companies worked together to accurately re-create this latest mini car.

It’s an exciting time for the auto industry, with electic power, 3D printing, advanced design and simulation technologies already dramatically reshaping the automotive landscape. Dassault Systèmes’ technologies are at the center of it all, and we’re proud to be along for the ride.

Molly Gately is a passionate writer, who is excited to be a part of Dassault Systemes' North American Public Relations team. Molly has covered a variety different industries in her career, including automotive and tech. She has been published both on the web and in print. Most recently, she wrote for the Milford Daily Newspaper.