Unless you live in a bubble, you’ve probably heard that apps are exploding, both in volume and variety. Don’t believe me, though. Let’s look at the data: 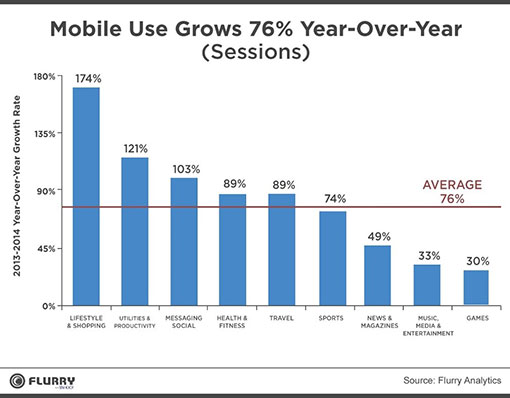 Across the board, app usage is exploding. In the words of Yahoo’s Simon Khalaf:

“As our mobile devices become more and more a part of our everyday lives, we are increasingly using them for always-on shopping, working, and communication. Where years past have seen massive growth in games and entertainment, 2014 was the year apps got down to serious business.”

That’s not to say, though, that all apps are created equal. Nothing could be further from the truth. There may be an app for everything, but make no mistake: apps are just like movies, books, music, and search-engine results. All of the them follow a power law (aka, the 80/20 rule). To wit, most people rely upon relatively few of them. For every Evernote or Tinder with millions of downloads, hundreds or even thousands of apps are mired in virtual anonymity. Yes, the Long Tail is alive and well.

If you think that there’s a bevy of apps now, you ain’t seen nothin’ yet.

Enter the Internet of Things

To be sure, we’re still in the first inning of the Internet of Things (IoT). A visit to CES this year confirmed as much. We’re nowhere near anything resembling maturity and true interoperability, never mind common standards. On the contrary, a bouillabaisse of disparate devices, apps, and technologies makes it all but impossible for non-techies to link devices together. Maybe in five years we’ll look back and chuckle as we seamlessly plug and play new, connected, and “smart” devices into our networks. As of now, though, we have a long way to go, and I’ll use myself as an example.

On my iPad, I carefully arrange my apps into folders so I can, you know, actually find them. About a month ago, I created a new bucket: Home. 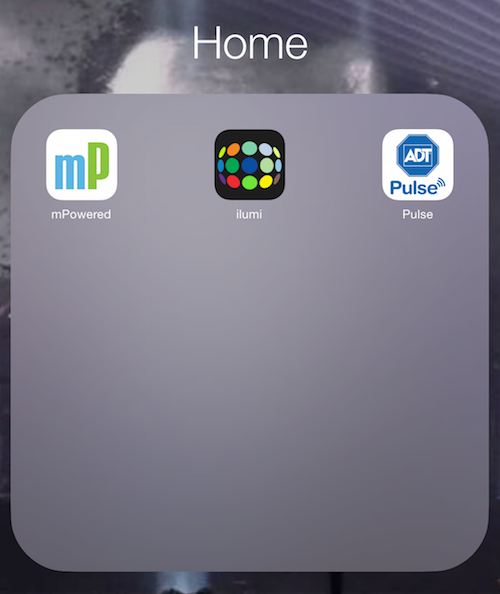 I can quickly access apps that allow me to control my thermostat, lights, and alarm system. Note that I could have just as easily put my home-stero app (Sonos) in there, but that lies in my music folder.

I suspect that this folder will contain many more apps in the upcoming years as the IoT matures. At the core of this lay important, robust, and new technologies, one of which is Google’s new IoT “platform”, aka Brillo. As Lily Hay Newman of Slate explains, it seeks to be a “central place where users can access and control their IoT devices through uniform standards that allow products from different manufacturers to coexist.” Put differently, the types of things we’ll be able to do will explode. One can only imagine the innovations that we’ll see.

As I look at what the future and the IoT portend for apps and platforms, they will become both wider and deeper. Every company is becoming a tech company. Just look at Honda’s recent announcement. Organizations that cling to legacy systems, applications, data sources, and, above all, mind-sets will either become irrelevant to extinct. Failing to embrace the present—never mind the rapidly approaching future—is a sure-fire way to become the next Blockbuster.