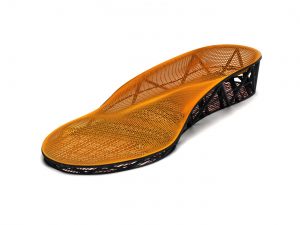 Adidas harbors a solid reputation in casual and comfortable performance footwear. In 2016, the company drove in $9.07 billion in revenue solely from its footwear segment. Take a look inside your closet; you’ll probably find something manufactured by Adidas. If not, the athletic company is coming out with something that may peak your interest. As a leader in sustainable innovation, the Adidas Group is listed fifth among the ‘Global 100 Most Sustainable Corporations in the World‘. The company’s core mission aims to continuously bring forth new programs that reduce its environmental footprint, whilst leaving lasting impressions with consumers. Adidas marked a major milestone this April, as it unveiled its latest 3D-printed shoe, the Futurecraft 4D.

Like something out of a Back to the Future film, the Futurecraft 4D is the latest futuristic 3D printed shoe following the inception of the original 3D Runners concept. These new sneakers are better in a major way- they can be mass-produced and Adidas plans on releasing 5,000 special edition pairs this fall. A question still remains: how will the footwear giant print so many pairs? Adidas has partnered up with Carbon, an additive manufacturing startup that is on a mission to help manufacturers and designers cut their costs, waste less energy, all while speeding up the time it takes to get from concept to product on the market. If Carbon sounds familiar, it’s because we’ve covered them in a previous post praising their strides in produce high quality parts at a high volume. With such a prominent place in the 3D printing market, Carbon is the ideal teammate for Adidas. By using Digital Light Synthesis and liquid resin, the startup is able to print objects up to 10 times faster and more flexible than those printed by traditional 3D printers. Of course, this technology hasn’t yet broken all records in 3D innovation, thus only the midsole is printed and sewn to Adidas’ regular fabric. Although it’s hard to imagine, envision a spider web in the shape of a foot, with enough durability to wear and enough flexibility to shape. Typical foam soles don’t allow for any changes, but the 3D printed ones allow for performance-enhancing modifications. In terms of athletic footwear, this is the best it can get. Rather than gluing and finding foam that comfortably fits runners from all walks of life, Carbon has the power to change the calculations within the mesh sole to make key areas either firmer or softer. About 75% of people in the United States have foot pain, which prevents them from wearing certain types of shoes.

In fact, to create this intricate webbed midsole, Carbon utilizes Dassault Systèmes’ SIMULIA.The video embedded below features our simulation software in-action at 0:23 and 1:25. The Futurecraft 4D is truly an exemplary result of what it means to tie together two technological brands like Carbon and Dassault Systèmes. Adidas is the first big player highlighting the importance of printing custom and sustainable footwear. Although the company can’t foresee how many of its 350 million sneakers will be 3D printed, it dares to dream.