The first Terminator was destroyed in a factory by a hydraulic press—now parts of him have reappeared in a plant setting. Ford Motor Company is piloting an exoskeleton device to help assembly workers lift their arms above their heads more easily. That’s a big deal for assembly line workers, who can raise their arms doing overhead tasks as much as 4600 times per day—about a million times a year.

The upper-body exoskeletal tool, called EksoVest, elevates and supports the arms. The unpowered vest is designed to reduce the strain, and risk of injury, from high-frequency, low-duration tasks. It’s being piloted at two Ford U.S. plants, with plans to test in other geographies. It’s made by Ekso Bionics—fittingly, headquartered at the site of Ford’s Richmond, California factory that opened in 1931 and built the Model A, and where the physical effort to assemble the cars must have been punishing.

The vest supports the weight of the worker’s arms—so overhead work puts less strain on the shoulders and arms—by providing 5-15 pounds of lift assistance per arm when the springs are activated. The worker gets support for overhead tasks that don’t require tools, or for tasks needing tools that weigh up to about 8 pounds, like drill and impact drivers, torque wrenches, and paint sprayers or brushes. 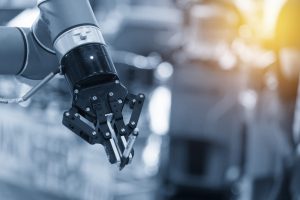 This speaks to an important issue—as manufacturers move full-tilt to robotics for automation, we shouldn’t neglect efforts to augment the human workforce with assistive robotics in the interim, to moderate the demands of physical work. Even if it’s going to be a mostly robot future in automated manufacturing, the reality is that, today, there are still plenty of repetitive, taxing, physical tasks to be performed in the plants. It’s not only a productivity issue—health and safety are a big concern. That’s what got the union on board. “The health and safety of our membership has always been our highest priority,” said UAW-Ford Vice President Jimmy Settles. “With the proven success of the piloted locations, we look forward to expanding this technology to our other UAW-Ford manufacturing facilities.”

Ford heartily agrees. Between 2005 and 2016, the automaker stated that it decreased incidents leading to days away, work restrictions, or job transfers by 83%, to an all-time low of 1.55 incidents per 100 full-time North American employees. “Investing in the latest ergonomics research, assembly improvements and lift assist technologies has helped design efficient and safe assembly lines…” said Bruce Hettle, the automaker’s group vice president for manufacturing and labor affairs.

It might not have the pizzazz of the cinematic Terminator’s combat-hardened “hyperalloy” exoskeleton, but the vest is getting results. “My job entails working over my head, so when I get home my back, neck and shoulders usually hurt,” said Paul Collins, a line worker at Ford’s Michigan Assembly Plant. “Since I started using the vest, I’m not as sore, and I have more energy to play with my grandsons when I get home.”