Commercial air transportation finds itself at a historic inflection point.

In 2009, when the world’s airlines committed to cutting its carbon emissions in half by 2050, it became the first industry to commit to an ambitious de-carbonization target before most other sectors even acknowledged there was a climate-change problem.

That was then, this is now. The new target, as of October, is net-zero emissions by 2050—double the previous stretch goal—to align

commercial aviation with climate goals set for most developed economies, including the United States and the European Union. This means that the carbon-mitigation blueprint of 12 years ago is no longer aggressive enough, according to Willie Walsh, director-general of the International Air Transportation Association (IATA).

“Science tells us [carbon emissions] are worse than we thought, and the previous target was not ambitious enough,” says Walsh. While “challenging,” reaching net-zero emissions is achievable. “We have a plan,” he said.

There is no one solution to tackling aviation’s role in mitigating climate change. The current consensus is that 65% of carbon will be abated through sustainable aviation fuels; 13% through new propulsion technology, such as hydrogen; about 3% through efficiency improvements; and the remainder through carbon capture and storage.

For the most part, western airlines and their OEM suppliers are in lockstep. “Sustainability is the biggest issue we face as a generation,” United Airlines CEO Scott Kirby said. For its part, GE Aviation, a major manufacturer of jet engines, as a company has embraced the goal of being carbon-neutral in its own operations within eight years, and it’s developing and deploying digital tools that enable airlines to identify new operational efficiencies, according to John Slattery, GE Aviation president and CEO.

China Southern Airlines and the Chinese government wants to extend the timing of achieving net-zero emissions 10 more years, to 2060.

Meanwhile, proponents of hydrogen-electric propulsion are pushing deeper into short-haul air transportation with deals that could see the conversion of large turboprops and regional jets and the first zero-emissions commercial passenger flights with smaller aircraft in 2024. Startup ZeroAvia already is converting a 19-seat Dornier passenger aircraft to a hydrogen fuel-cell propulsion testbed.

Technology innovation is exploding across aerospace, especially at the subsystem level. Even industry captains who have observed prolific cycles of technology advances are astounded. At a recent industry gathering, aerospace executives were questioning whether it even makes sense to develop brand new aircraft based on existing technology. And should Airbus and Boeing—the world’s leading commercial aircraft manufacturers—concentrate on disrupting themselves? 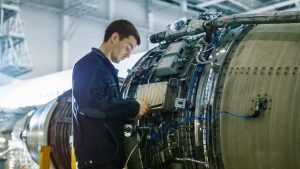 The thinking is that it’s extremely unlikely that either OEM would develop a brand-new model, versus an improved derivative of existing ones, using current technology—defined as being the design and manufacturing technology used for aircraft currently in production. It is near axiomatic that any new model needs to offer at least 15% better economics than the models that it would replace. As one executive put it, “Such improvements can only come from major changes and improvements in airframes, engines and systems.”

While that may be true, the unvarnished truth is that renewed fleets with more efficient aircraft take decades. Developing zero-emission electric- and hydrogen-powered aircraft will take years, as will improving the efficiency of air traffic management systems. it is self-evident, therefore, that the overwhelming contribution will have to come from sustainable aviation fuels. It is the only mechanism for large-scale net carbon emissions in the near term, and for that to work production volumes must increase and fuel costs must decrease, according to Walsh.

Join Dassault Systemes at AeroDef Manufacturing, November 16-18 in San Diego and learn how to accelerate innovation to speed time to market and meet industry challenges for a sustainable future.  Register here.