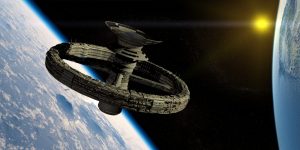 It’s not easy for machinery, electronics, or people to survive in space, especially for extended periods of time. It’s also very difficult and prohibitively expensive to successfully launch something into orbit (at least 62-miles above the atmosphere). Whatever it is that you’re launching needs to be able to withstand the extreme heat, speed, and G-forces that come with a launch.

Commercial space flight is the future of travel, with companies such as Virgin Galactic and SpaceX racing to bring wealthy elites into space it’s conceivable that people will want to vacation there someday. To date, there are no places to stay in space, and it is impossible to launch an entire hotel into orbit. The question that persists, is how do you build a structure that can survive the subzero temperatures of space, without spending millions upon millions of dollars launching parts into space? One company, Made In Space, hopes to provide a solution to this problem, with 3D printing.

Made In Space already has two 3D printers aboard the International Space Station but its new project, the Archinaut, will utilize robotics to 3D print and assemble massive projects in outer space:

“The company’s Archinaut technology actually assembles 3D-printed parts piece by piece using robotic arms. In the video below, you can see the ESAMM first 3D print a series of trusses and nodes before a duo of robotic arms locks them together. The structure seen in the video also includes embedded electrical connections.”

The Archinaut, also known as ESAMM (Extended Structure Additive Manufacturing Machine) has received substantial funding from NASA. Both parties hope to test it in outer space within the next three years.

Given the lack of human-friendly conditions in outer space, it is very likely that 3D printing could become the new standard for construction around earth’s orbit, especially if it becomes more cost-effective and easier than constructing parts or satellites on Earth and launching them into space. NASA understands these constraints and is banking on 3D printing as an alternative to an outdated approach. So much so, in fact, that the space agency held a contest challenging engineers and manufacturers to develop methods for 3D-printing homes in space.

Additive manufacturing has long been the “next big thing,” for satellite and aerospace manufacturers. We can’t hope to successfully journey to Mars or distant galaxies that support human life if we are tethered to Earth when it comes to manufacturing the sophisticated machines needed for such undertakings. Thanks to innovators like Made In Space, we will be more agile, able to free ourselves from the limitations of gravity, and truly set forth on a new chapter of exploration and discovery.