After a 10 month hiatus in Hawaii, the Solar Impulse 2 (Si2) finally took off in the morning of April 21 to resume its round the world journey. This time, the Si2 had set its sights on Mountain View, California and landed April 24th after spending two days, 14 hours and 29 minutes in the air over the Pacific ocean. This flight, powered entirely by solar energy, coincidentally took place over Earth Day.  After landing in California, the plane took off again on May 2, bound for Phoenix – nearly 16 hours of flight time – where it now sits in a temporary hanger, awaiting favorable weather to continue its flight across the country, with its ultimate destination of Abu Dhabi, via New York City, squarely in its sight.

Without using a single drop of fuel, the Si2 is an ambitious project that epitomizes the advantages of adopting solar energy, demonstrating that clean technologies can achieve the impossible. Across the main wing, fuselage and horizontal stabilizer, 17’248 solar cells power the four lithium batteries, which in turn power the four motors and propellers, allowing Si2 to fly through the night towards the next dawn.

But perhaps more than anything, the Si2 encapsulates the spirit and enthusiasm of Swiss pioneers and aircraft pilots  Bertrand Piccard – Initiator and Chairman – and André Borschberg – CEO and Co-Founder –  driving forces behind Solar Impulse. 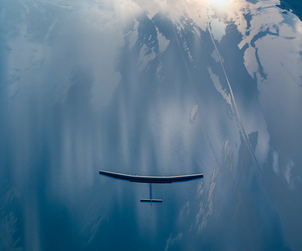 On his flight over the Pacific, Piccard was on a journey similar to that of American aviator Amelia Earhart, who set off from Honolulu for the first solo flight to California. Despite the many parallels between these flights, one significant difference remains: while Earhart’s airplane took off carrying more than 500 gallons of gasoline, Si2 flies with no fuel.

Both men take turns piloting Si2 around the world, but have different respective roles within the project – while Piccard outlines the project’s vision, philosophy and political reach and brings together the partners to fund this adventure, Borschberg pulled together the team that designed and constructed Si2 and drives the airplane’s technological innovations into new engineering solutions. Together the two Swiss pioneers are attempting the first Round-The-World Solar Flight with no fuel, to support concrete actions for sustainability and demonstrate that the world can be run on clean technologies.

Dassault Systèmes 3DEXPERIENCE is at the center of Solar Impulse’s aircraft, with the CATIA and ENOVIA platforms being used to develop, test and validate the Solar Impulse planes since 2006. Powering advanced designs that lead to a more sustainable future is the core philosophy of Dassault Systèmes, and we’re proud to be a partner.

While there were certainly complications along the way, the Si2 has already done the impossible so, in the immortal words of Journey, don’t stop believin’!