A recent opinion article in UK newspaper The Guardian describes several incidents in which a local accident or incident causes repercussions around the globe. The author then comments, “[Today’s] tightly calibrated infrastructure is designed for perpetual motion. Once one link breaks or stalls, the impact on today’s Just-In-Time supply chains can be felt immediately.”

For those unfamiliar, Just-In-Time (JIT) was created at Toyota in the 1950s, expanding on Henry Ford’s initial work in 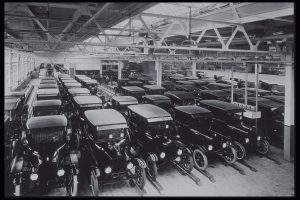 designing assembly lines. JIT’s Big Idea is to eliminate “waste” — stockpiles, extra workers, and idle time — as elements of the manufacturing process. As articulated by Toyota engineer Taiichi Ohno, suppliers would deliver parts or raw goods just when they were needed, instead of in advance to be held for later use. Schedules and headcounts were adjusted to match.

Just-In-Time was adopted by Western manufacturers starting in the 1980s, first with automotive but moving on into all kinds of manufacturing production. Today it is not an oversimplification to say JIT and its soulmate Lean (emphasizing maximizing productivity while minimizing waste) has fueled a 24/7 work economy, with its emphasis on quick delivery of products at ever-decreasing prices. Those decreasing prices were often found in countries on the other side of the world, resulting in increased dependence on a global, multinational supply chain.

Successful manufacturing with a JIT/Lean philosophy depends on a robust and healthy supply chain, which in turns relies on robust and healthy transportation infrastructure. Warehouses built for storage are now distribution and fulfillment centers. Trucks, railroads and shipping are expected to be running around the clock as needed to keep factories humming.

If the combination of pandemic and calamity has taught us anything, it is that what happens in one region has an impact far away. As The Guardian article notes, the first shortages to appear during the pandemic were of personal protective equipment (PPE), the gowns, masks, and gloves required to keep society running while staying protected from COVID-19. Unfortunately, the manufacturing of those items had all shifted to JIT years ago. No masks, no work delivering more masks, or anything else. The first shortage caused a supply chain disruption cascading from one industry to the next.

Supply chain and logistics experts all learn about the trade-off between risk and resilience; now that knowledge is being put to the test as never before. Low inventories mean higher risk of shortages. Heavy reliance on shipping can cripple production when just one ship is stuck sideways in the Suez Canal, causing thousands of ships to either sit idle or circumnavigate the globe.

There is no one answer to the manufacturing crisis that sits at the intersection of pandemic and production. It is a classic example of what both systems engineers and social planners call a wicked problem. The generally accepted definition of a wicked problem is one that is difficult or impossible to solve, because there are contradictory, changing, and incomplete requirements. These requirements are often difficult to recognize, and generally carry both an economic and a social cost.

New challenges often require new ways of thinking and new tools. Both academic and professional researchers are looking at experiential design technologies as one part of the solution to the wicked problem of a supply chain in crisis. Andrew Earle and Dante Leyva-de-la-Hiz have created a conceptual model for using augmented and virtual reality (AVR) as a tool for educating future designers and engineers on how to solve wicked problems. Dassault Systemès is engaged in delivering the twin ideas of Digital Thread and Model-Based Operations, extending the current wave of Digital Transformation beyond engineering into the extended enterprise value network.

Bringing model-based operations and visual experiences to the wicked problem of pandemic-induced broken JIT production may not be a magic bullet, but it certainly could give us a clear view of a path that leads in the right direction.