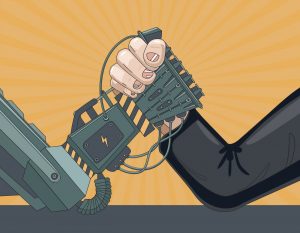 The news media have been having a field day about the $400 (previously $700) wi-fi and IoT (Internet of Things) enabled juicer, the Juicero, that squeezes prepared bags of ground fruits and vegetables to quickly dispense healthy drinks. The media firestorms started when a Bloomberg reporter determined that the bags could be squeezed by hand and yield nearly the same amount of juice just as quickly—and in some cases faster. Why would someone need a $400 device to do that? As for the wi-fi and IoT features – Juicero can read a QR code printed on the produce pack and check an online database for expiration or recall. The expiration date is also printed on the pack. The company had raised $120 million in venture capital to develop and market the device.

The Juicero fiasco is just a rather amusing illustration of a common phenomenon that occurs with emerging technologies. Public interest is stirred and the technology is brought into products just for the sake of riding the trend and exploiting the market interest. If the technology does not deliver value at least commensurate with added cost, the product will fail in the marketplace. Unfortunately, really good applications of the technology may also suffer from the unfavorable publicity – tarred with the same brush, so to speak.

In truth, this is normal market behavior. Any new technology will have to find its place and prove its worth. Failures are to be expected. You can fault the producing companies for their lack of understanding of the technology and its place, and perhaps for unscrupulous attempts to exploit a trend. But give credit, too, for creativity and willingness to innovate.

While this phenomenon is quite apparent in consumer product markets, it also applies in industrial settings – industrial product failures just don’t get the same headlines. Many companies have invested in various automation technologies that just didn’t pay off either because the technology was not sufficiently mature or, more often, because it was misapplied. That misapplication is eerily similar to the squeezable juice bags – the automation does not deliver sufficient added value to justify its cost. It doesn’t pay to install a robot to do a task that can be easily and quickly accomplished at the same or lower cost by a human*. Most automation, even today, is used for relatively simple, repetitive tasks formerly performed by low-cost labor. But that is changing. Automation is becoming more sophisticated and more capable at the same time that costs are declining through advancements in technology.

The Industrial Internet of Things (IIoT) is still in its early stages but is very rapidly growing and maturing. Low cost smart sensors and devices are beginning to proliferate throughout plants and supply chains. And while there are many examples of very successful projects with outstanding benefits, there are also many examples of IIoT technology that is not, at least yet, delivering the expected benefits. In some cases, these may be misapplied technologies; measuring things that aren’t important or tracking activity that doesn’t really matter. But more often, it’s a case of not having the analytical tools, processes and procedures, educated users, and/or links into management systems that can make productive use of the data being gathered or functions performed by IIoT devices. In these instances, the benefits are available but the company just hasn’t put all the pieces together. They need to continue the build-out of their IIoT smart factory or smart supply chain. These early investments will pay off, as long as they continue to build the back-end systems, processes and interfaces necessary to make IIoT a part of their infrastructure and not just an add-on.

* Certainly, there are other reasons for using robots or automation other than just cost savings including safety (keeping people out of dangerous locations), precision and repeatability, etc.