When platform engineer Isis Wenger appeared in an ad campaign for her company, she didn’t expect the backlash she would face. People commented on her photo, questioning if she was an engineer and implying that she was too pretty to be one, that she didn’t “fit” the part.

Wenger fought back on social media, by launching the hashtag #ILookLikeAnEngineer on Twitter, which is meant to challenge the stereotypes that exist in the tech industry and to spread awareness about the importance of diversity.

Check out Wenger’s blog post article to get a deeper look into her story.

Here at Dassault Systèmes, we were proud to get involved with the movement. Along with a group photo we took of some of our female engineers, many of our other employees have joined the movement online. Check out the Vine video from our colleagues in Paris! 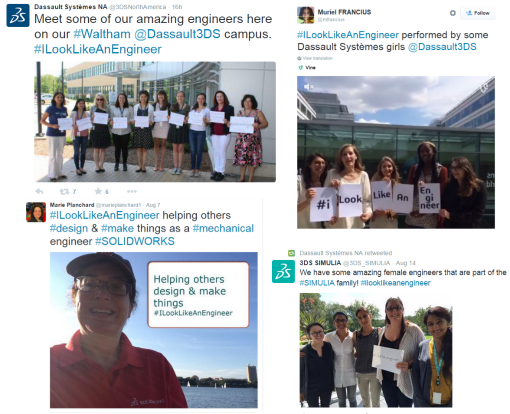 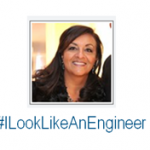 Even employees who weren’t on Twitter wanted to participate.

Our SOLIDWORKS Blog has also featured a few of our star female engineers, including Carmen Graves and Kristen Railey, as part of their SOLIDWORKS Women in Engineering Series. In their interviews, both women offered advice for women looking to enter the engineering fields.

“Don’t get intimidated if you don’t get something off the first try. Keep at it and figure it out,” said Graves. “Take the time to figure out a solution to a problem even if the person next to you gets to the solution faster. If you give up right away, you will hinder your own performance.”

Women play a variety of important roles across our company and are valued members of the Dassault Systèmes’ team. In North America, we promote women in the workplace through our WIN initiative. This program is used to support women working in the company and to help them achieve their highest potential through professional networking and experts who provide coaching on topics like business communication and work/life balance. The WIN initiative also supports the technical education of women in Rwanda.

“The biggest key to innovation is looking for people that can look at a project from a different perspective and men and women do approach problems differently. By actively having both, a company is more likely to form a team that pushes each other to use new tactics and take a fresh approach,” explained Vice President, General Counsel, Debbie Dean, who leads the Women’s initiative. “Recently, there has been evidence that higher diversity has a positive relationship with profits and the economy.”

Dassault Systèmes is committed to supporting the women in our company, whether through our internal program or through external initiatives, such as the #ILookLikeAnEngineer movement.

Molly Gately is a passionate writer, who is excited to be a part of Dassault Systemes' North American Public Relations team. Molly has covered a variety different industries in her career, including automotive and tech. She has been published both on the web and in print. Most recently, she wrote for the Milford Daily Newspaper.