The Nissan Leaf, Chevy Bolt, and Tesla’s Model S. These are just a few of the electric vehicles (EVs) we’re now accustomed to seeing on America’s roadways.

Although drivers and riders are increasingly adopting plug-in cars, the latest industry reports indicate plug-ins are still only slightly above 1% of total automotive sales in the U.S., according to EVAdoption.

Chelsea Sexton, a consultant and advocate for electric vehicles and the co-founder of Plug In America, recently spoke about future EV success at the

Electric & Hybrid Vehicle Technology Expo organized by UBM. Held in September, the Michigan-based event drew more than 8,000 engineers and executives, as well as more than 600 suppliers.

From her experience, Sexton said the typical reaction she observes from those who have driven an electric vehicle is very positive. In fact, according to a survey from AAA, about 20 percent of Americans say they will likely buy an EV for their next car.

When considering the purchase of a plug-in, Sexton said consumers often focus on price and range. However, she said these aren’t necessarily the main issues when it comes to the future deployment of EVs.

During her keynote speech, Sexton shared information about some of the challenges and opportunities in regard to the ultimate success of EVs and how they might be addressed.

The number one issue facing the further deployment of EVs, according to Sexton, is a lack of product. Nearly all automobile manufacturers are in some stage of developing EVs; however, she said more variety is required. “We need the same sort of variety of vehicles in terms of size, performance, price and utility that we currently enjoy with internal combustion vehicles,” said Sexton. “We also need far more geographic distribution.” In California for example, there are currently more than two dozen different plug-in cars available for purchase, while in other states, such as Oklahoma, there might only be four. This is the only time in the history of the automotive industry where the core industry has required that demand continually beat supply, Sexton observed.

Another barrier associated with EVs is the lack of awareness or what she refers to as “emotional interest” being generated by marketers for EVs. Although many people enjoy driving an EV, the bulk of the population is currently unfamiliar with the new technology. As a result, EVs are often marketed similarly to an appliance, which can take the fun out of the purchase. “No one gets excited about their refrigerator,” Sexton said. “We forget at the end of the day these are still cars and cars are the second biggest purchase you’ll make in your life and very emotional purchases.” In addition, much of the data currently available has shown that automotive dealers aren’t incredibly supportive of EVs. Although this varies in different regions of the country, in many cases, Sexton said dealers are finding they aren’t receiving enough training and financial support to offer these cars to consumers. 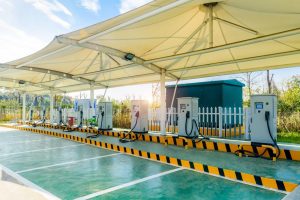 Infrastructure issues are also a hurdle that must be addressed. EV car owners typically plug in their vehicles overnight while they are sleeping, so they are fully charged for the following day. As more EVs are on the road, drivers will increasingly expect publicly-accessible charging stations to be as convenient as it currently is to fuel up gasoline vehicles. Sexton envisions new scenarios available, such as a “depot model” where a half a dozen chargers are set up on a street corner, so that drivers can charge their vehicles in 10 minutes. However, she cautions against focusing on the “gas station” idea at all costs. “We want to create other ways for charging and not paint ourselves in the corner of making future mobility like past mobility,” she explained.

Advances in technology are also going to play a key role as more EVs are introduced, especially those that are cloud-based. Although software updates are currently being used for recalls and minor vehicle updates such as those for navigation maps, Sexton said that over time consumers will begin to think about their vehicles similar to the way they view smart devices. A prime example is Tesla’s over-the-air update feature. “Companies are starting to condition vehicle owners to expect that not unlike their phones, their car might do something tomorrow that it didn’t do yesterday, explained Sexton. “That a massive paradigm shift.”

In order to address the challenges, Sexton said a common understanding of these issues is needed first.

She projects that manufacturers will be mindful of this when introducing new products to the market. “The cycle of innovation is accelerating,” said Sexton. “The cycle of seven years to update a vehicle program is no longer considered timely.”

Innovators are realizing the importance of being flexible and responsive to the market as well as being aware of new policies and regulations. “Generally, it matters more that you get the product right rather than get the product fast or first,” she said.

In the meantime, EV advocates say that consumer awareness and independent dealer training are critical. “People aren’t going to buy what they are not aware of and what’s not available,” she added. As a result, third-party organizations such as Plug-In-America, a non-profit advocacy group for electric vehicles in the United States, are stepping up to help support the future deployment of EVs. Hundreds of events are being held around the country to offer consumers the opportunity to experience the look and feel of an electric car without the pressure to purchase one.

Over the next decade, Sexton foresees that deployment in the U.S. will continue; however, where and how much remains to be seen and will largely depend on how regulations play out.