It’s easy to feel helpless when it comes to climate change. How do we slow or stop it? How do we even predict it? While the former depends on a variety of factors, including the cooperation of governments, businesses and even individual citizens across the world, the latter is in the hands of scientists – and they are harnessing the power of simulation to do so.

The European Union has launched two programs, Green Deal and Digital Strategy, in the hope of becoming carbon neutral by 2050. A major component of this ambition is the Destination Earth initiative, which will involve the creation of a digital twin of the Earth. This simulation project will, as accurately as possible, map climate development and extreme events by modeling the Earth’s physical resources.

Users of Destination Earth will be able to access massive amounts of natural and socio-economic data in order to continuously monitor the health of the planet by studying the effects of climate change, the state of the oceans, the cryosphere, biodiversity, land use, and natural resources. The project will include the implementation of dynamic, high-precision simulations of the Earth’s natural systems such as water, land, coasts, and atmosphere. Destination Earth will help scientists to predict and plan for extreme weather events such as hurricanes and other natural disasters.

The project will be centered on a federated cloud-based modeling and simulation platform that will provide access to data, advanced computing infrastructure (including high performance computing), software, AI applications and analytics. Initially, Destination Earth will be open to public authorities only, and then eventually will be made available to scientific and industrial users.

Destination Earth will be gradually implemented over the next seven to 10 years, starting this year. The timeline will look something like this:

Digital twins are also known as virtual twins when data is communicated through a scientifically accurate 3D model. They are an extremely powerful asset for industry, infrastructure, and as Destination Earth intends, the planet as a whole. Virtual twin technology has been used in the development of 85% of the world’s electric vehicles, more than 75% of global wind power, and in sustainable new projects including electric furnaces, the world’s first solar airplane, and new bio-materials.

SIMULIA and Dassault Systèmes as a whole are committed to sustainability and have dedicated a large number of resources to providing digital and virtual twin technology to a variety of sectors. Dassault Systèmes’ software has been used to help businesses through the pandemic by creating digital twins of factories, office spaces and even classrooms. 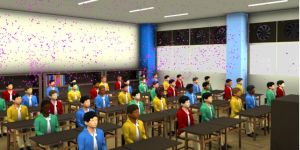 students and teachers, finding that the safest conditions can be created through certain desk configurations and ventilation patterns.

The driving forces behind the project will be the European Centre for Medium-Range Weather Forecasts (ECMWF), the European Space Agency (ESA), and the European Organisation for the Exploitation of Meteorological Satellites (EUMETSAT). Computer science expertise will come mainly from scientists at ETH Zurich and the Swiss National Supercomputing Centre (CSCS).

Dassault Systèmes recently worked with Accenture to study the effects of virtual twin technology on sustainability. You can download the report here. Whether it is automotive manufacturers using virtual twins to find ways to reduce emissions, or consumer packaged goods companies implementing the technology to create greener packaging, digital and virtual twin technology is already playing a large role in creating a more sustainable planet.

Clare Scott is a SIMULIA Creative Content Advocacy Specialist at Dassault Systèmes. Prior to her work here, she wrote about the additive manufacturing industry for 3DPrint.com. She earned a Bachelor of Arts from Hiram College and a Master of Arts from University College Dublin. Clare works out of Dassault Systèmes’ Cleveland, Ohio office and enjoys reading, acting in local theatre and spending time outdoors.