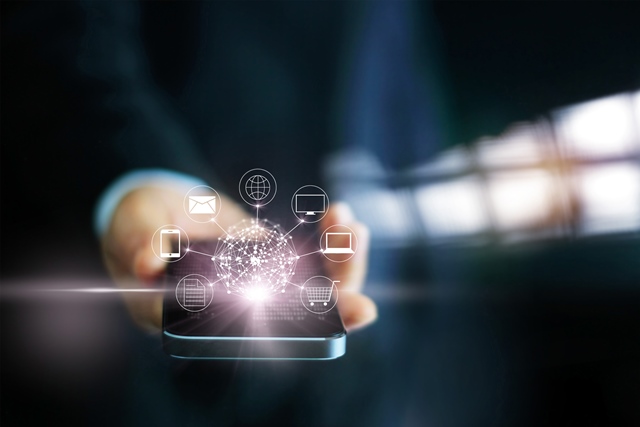 Gartner says that 8.4 billion connected things will be in use worldwide this year, up 31% from 2016. IDC estimates that worldwide spending on the Internet of Things (IoT) will grow 16.7% in 2017, reaching just over $800 billion.

When we talk about big numbers such as these, it’s always advisable to look at the big picture. To understand the true potential of the IoT and what may sustain and even accelerate its development in the future, it’s important to place it in the larger context of the forces that have given rise to new technology-related markets over the past 50 years.

Two forces have rapidly expanded the universe of opportunities created by the invention of the modern computer—digitization and networking.

Digitization is the representation and augmentation of our physical world in ones and zeros. Multiple waves of digitization have turned all that is analog to new entities capable of processing information in digital form, joining in a growing ecosystem of “things” that speak the same language. Film-based cameras have turned into digital ones, analog telephones switched from sending continuous sound waves to digital audio signals, and the entire TV industry has transformed itself into a vast collection of digital broadcasting devices.

The IoT represents a new digitization wave. This wave is mostly about digitizing previously “dumb” devices and non-networked things. The “democratization of data,” the 1990s shift from enterprises to individuals as the creators of most of the world’s digital data, now includes not just individuals but all things.

Today, ordinary things not only have access through the Internet to the data created by individuals and enterprises, but they also create terabytes of data on their own and transmit them to other things, individuals, and enterprises. The IoT is expanding the participation in the democracy of data to include every sign of intelligence (that is, software) in the world.

Democracies are characterized not only by individuals’ ability to create and consume information, but also by their active participation and engagement with one another. This brings us to the second force expanding the opportunities to improve how we live and work—networking.

The network effect specifies that the value of a product or service depends on the number of people using it. This principle was first associated with the telephone—the more people own telephones, the more valuable is the telephone to each owner. It has recently has been applied to social networks such as Facebook where their value is defined by the number of people connected through them. Similarly, as more and more devices are networked through the IoT, its value increases.

The IoT is yet another child of the twin blossoms of the computer age: digitization and networking. The lingua franca of this age, the language of ones and zeros, is going to be spoken by billions of additional touch points, increasing the value of the conversations and opening up countless new opportunities for improving life and work.

It will take a long time to realize these opportunities, however, if the rapid decrease in the cost of IoT components (e.g., sensors) and the hype surrounding the IoT will only serve to attract many new entrants that will develop IoT products and services without paying much attention to data-centric design.

Two of the most successful tech innovators of this century, Apple and Google, have often been portrayed as taking different paths to launching products that users find appealing, easy to use, and even addictive. Apple is obsessed with design; Google with data. Great aesthetics and “good taste” have been the foundation of Apple’s philosophy and business strategy since the company’s inception. Measurement, analysis, and data-driven decisions have guided Google since its founding.

These two philosophies are now converging in the evolution of the Internet of Things. If the IoT is to provide real value to users, design and data must be redefined and merged into a single approach for making products exciting and delightful to use. Great experiences will be provided by products that are designed to be almost invisible and provide the most useful and engaging data to their users.

The idea that the best technology is invisible to the user may have originated at Xerox PARC in the early 1990s. Mark Weiser, then head of the Computer Science Lab at Xerox PARC, famously argued that “The most profound technologies are ones that disappear. They weave themselves into the fabric of everyday life until they are indistinguishable from it.” The IoT should fulfill this vision of “ubiquitous computing,” connecting things that are designed so they become an integral, almost invisible part of people’s lives.

For the IoT to flourish, products and services should be developed not only with an emphasis on making technology fade into the background, but also with data and its analysis at their core. The value of the “things” in the IoT is measured by how well the data they collect is analyzed and how quickly useful feedback based on this analysis is delivered to the user.

These principles apply not only to consumers, but also to enterprises. The IoT promises to improve internal operations, cutting waste and improving productivity in numerous activities, from inventory management to supply chain logistics to customer relations. Just as with consumers, however, enterprises will not benefit from the true potential of increased connectivity if their workers are overwhelmed by data. If the data collected and transmitted by the IoT is not relevant, if it is not provided in a timely fashion, if the analysis does not suggest ways to improve a work activity or process, then enterprises will not benefit from the IoT. If employees, managers, and senior executives in enterprises big and small, private and public, don’t have positive experiences with this abundance of data, they won’t take advantage of it.

There is another big challenge that designers of successful IoT solutions must overcome: My data does not always talk to your data. Yes, they both consist of ones and zeros, but they are formatted differently and may be using different codes, names, and labels to describe the same thing. Semantics in general and the Semantic Web (a framework of common data formats that allows data to be shared and reused across Web pages and applications) in particular promise to help overcome this difficulty.

Semantically tagged data could give enterprises a much more granular view of their operations, allowing them to move from tracking assets to servicing assets to managing assets and finally to giving assets more autonomy to manage themselves. Web standards provide a layer that masks the idiosyncrasies of specific devices, especially those that have been developed and installed over the past 20 or 30 years and communicate in their own specialized language, thus creating data that can be shared by all other things on the Internet.

To take advantage of the opportunities and overcome the challenges presented by the Internet of Things, product and service developers must re-evaluate product design and the role of data and analysis. The more inconspicuous and data-centric the technology, the faster it will spread among a growing network of delighted users. If we’re able to get technology to recede into the background and analyze the onslaught of data in a way that reveals its significance, the Internet of Things will realize its huge potential.

Gil is Managing Partner at gPress, a marketing, publishing, research and education consultancy, and a contributor to Forbes.com. Previously, he held senior marketing and research management positions at NORC, DEC and EMC. Most recently, Gil was Senior Director, Thought Leadership Marketing at EMC, where he launched the Big Data conversation with the How Much Information? and The Digital Universe studies.