Three years ago during the most recent America’s Cup competition, Oracle Team USA found itself in an unfamiliar position: having lost three of the first four races of the series, the most lauded team in competitive yachting history faced the very real possibility of defeat. Its opponent in the final, Emirates Team New Zealand, had simply been faster. What happened next was, as they say, “one for the record books.” The events that unfolded over the final days of the race will be forever etched in the history of the sport as Larry Ellison’s crew of 11 international superstars stunned the racing world to recapture the America’s Cup in what the Wall Street Journal called “one of the greatest comebacks in the history of sports.”

Even while basking in glow of their well-deserved victory, Oracle Team USA immediately began preparing for the 2017 America’s Cup competition, with the goal of a third consecutive Cup victory. The new boat that they hope will propel the team to victory is, once again, designed with Dassault Systèmes’ 3DEXPERIENCE platform. By integrating powerful composite design, simulation, and manufacturing applications in a collaborative virtual environment, the 3DEXPERIENCE platform enables Oracle Team USA to leverage the skills of its global teams and rapidly develop, test, and perfect a technologically-advanced racing catamaran before it ever touches the water. 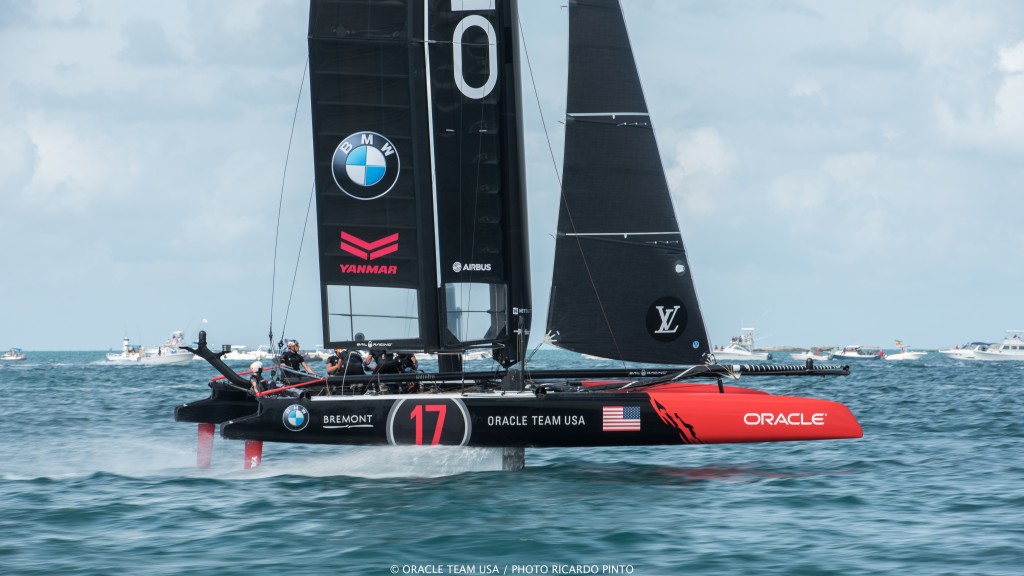 2013’s winning boat, which was also designed with Dassault Systèmes’ 3DEXPERIENCE platform, was a snarling black catamaran that towered 13 stories over the sea as it ripped through the San Franciscan waves at 55 miles per hour – the fastest speed ever achieved by a sailboat in the cup. The boat that will debut at 2017’s America’s Cup will be under wraps until its official unveiling before the race. We can’t divulge many details, but we can promise this: it’s going to fly.

As we saw during the previous America’s Cup, the Dassault-Oracle Team USA partnership – the combination of imagination, action, designers, builders, sailors and supporters – creates unprecedented holistic racing experiences by redefining the sport through design.