The Associated Press recently distributed an article about self-driving cars and how the straightforward logic built into these vehicles may strictly adhere to traffic rules but may have trouble in the real world where human drivers often follow more informal guidelines. Carnegie Mellon University computer engineering professor Raj Rajkumar, explains in the article that people have “an endless list of these cases where we as humans know the context, we know when to bend the rules and when to break the rules, but autonomous vehicles don’t have the same understanding.” 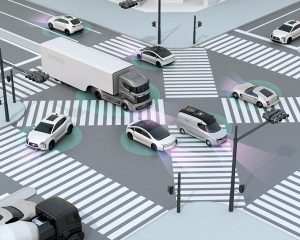 The article offered the following examples: “In Los Angeles, and other places, for instance, there’s the ‘California stop,’ where drivers roll through stop signs if no traffic is crossing. In Southwestern Pennsylvania, courteous drivers practice the ‘Pittsburgh left,’ where it’s customary to let one oncoming car turn left in front of them when a traffic light turns green. The same thing happens in Boston, Massachusetts.”

Now think about the robots that are fixtures in many manufacturing plants. Most of these devices are firmly mounted within a cage to protect us frail and flawed humans from getting injured because the robot has no awareness of our presence and cannot be expected to avoid inadvertently clobbering a passing human worker. This limits the use of robots in the plant, much in the way that the need to recognize the possibility of unpredictable human behavior is challenging the introduction of autonomous vehicles on the streets.

In the case of self-driving vehicles, the solution is a combination of added sensor technology, already quite advanced, and making the software ‘smarter’ so it can anticipate, recognize and quickly respond to these unexpected and illogical actions.

Much research and investment is going into the autonomous vehicle challenge because the market is huge and is self-driving vehicles are considered to be inevitable. But there is a coming revolution on the shop floor that, so far, is mostly under the radar. The next generation of factory robots will be able to work alongside humans – and that will make a huge difference in the way robotics are used and what human jobs they will replace.

The first of this new breed of human co-worker compatible robots are Baxter and his siblings Sawyer and Intera, available now from Boston-based Rethink Robotics. These vaguely human-like robots can sense the presence of humans and other obstructions nearby, and avoid hitting them or getting in their way. The robots are also easily programmed by “showing” them what to do and they will repeat the actions.

The important thing is that these relatively inexpensive, easy to teach robots can work side-by-side with humans anywhere on the plant floor and perform basic, repetitive tasks reliably and tirelessly.

These so-called collaborative robots or Cobots, as they are called at Think Robotics, provide an intriguing look at how the kinds of advances in sensing and programming that we’re seeing in the very public autonomous vehicle are also changing other aspects of our lives. Can a Baxter for the home be that far behind? An interesting take on how this might play out can be found in the 2012 movie Robot and Frank – check it out.