There is a vast difference between the consumer car industry and the commercial trucking industry, and the laws of physics dictate that big-rigs pulling heavy loads will consume more fuel than cars.  According to the Federal Highway Administration, “Class 8 trucks”, which carry heavy loads, get an average of 5.29 mpg, while “Cars” get an average of 24 mpg. You’d be lying if you weren’t one of the countless Americans who note where the cheapest gas is and tries to find any means to save extra money. A solution that will bring big fuel savings is just around the corner. Now, autonomous vehicles are not only sparking interest for their convenience and accessibility, but also for their promise to conserve gas. 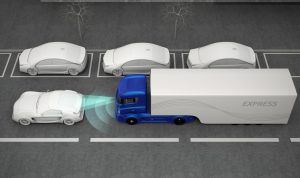 According to a new study by the Energy Information Administration, connected autonomous vehicles could reduce fuel consumption by as much as 44 percent for passenger vehicles and 18 percent for trucks by 2050. On the consumer side, that’s good news for everyone who’s able to drive a car, but could actually lead to an overall increase in the amount of fuel consumed in this country. How is this possible when the numbers look that good?   Autonomous vehicles may enable elderly people and younger drivers – people who can’t drive their own cars – to be on the road.  Therefore, the amount of cars on the road may increase twofold, since nearly 3.5 million people in this country never leave their homes. The Bureau of Transportation states that approximately one-third of both disabled and nondisabled drivers indicate they would consider giving up driving if they feel they cannot operate a motor vehicle safely, their eyesight declines, or they experience other physical limitations. To solve such issues, driverless cars promote ride-sharing and carpooling in order to add user experience value and yield better fuel economy. With more drivers being transported, in theory, fewer cars will be necessary on the road. Autonomous vehicles can bridge the gap for anyone anxious or unable to take the wheel, which will definitely have an effect on country-wide fuel consumption, although saving fuel and money for individual drivers.

Car size has the biggest influence on potential fuel reduction. Autonomous vehicles employ wired, rather than mechanical, driving and braking controls. Thus, car manufacturers can produce more eco-friendly cars by eliminating the weight of those mechanisms. This has posed another challenge for autonomous vehicle manufacturers in their efforts to lessen fuel consumption. Trucks are fairly straight forward in their make, since they already have a set size for their function. Autonomous trucks will always have a stable fuel savings starting at 18 percent. According to an article in Forbes,

Truck companies are expected to favor autonomous vehicles because they spare them driver costs, and when trucking companies platoon those robot trucks they will also enjoy fuel savings. “In one representative platooning test,” the study says, “two semi-trucks trucks were platooned at a constant 64 mph at a 36-foot following distance. This configuration resulted in an average fuel consumption saving of 4.5% for the lead truck and 10% for the following truck.”

In other words, autonomous trucks having the ability to platoon just like geese flying south, will cut down on wind resistance and save gas for the other cars on the road because they won’t have to brake. Autonomous cars, on the other hand, are more challenging to predict in regards to their fuel consumption. Style and performance will all have an impact on weight when it comes to consumer vehicles like coupés and sedans. Regardless of the challenges this may pose, autonomous vehicles are still offering a better alternative to those seeking relief when it comes to saving fuel.