As the global economy continues to expand and international relationships are forged, air travel and increased capacity at existing airports is not only inevitable but a necessity. No less critical is the aviation industry’s ability to monitor noise levels, since the increase in air traffic and associated ambient noise levels in nearby communities can create barriers to airport expansion.

There are two types of noise: tonal and broadband. Tonal noise is centered at a particular frequency and can often be tied to a resonance on the aircraft, such as a whistling cavity, while broadband, the more challenging noise to reduce, covers a wider portion of the spectrum. For commercial and military aircraft, the engine fan is the dominant source when aircraft are taking off and coming in for a landing. But turbulent air flow around structures such as the landing gear and the high lift devices can also contribute significantly to the acoustic profile of an aircraft.

One of the most innovative approaches to reducing aircraft noise is state of the art aeroacoustics simulation to identify the source of the noise. 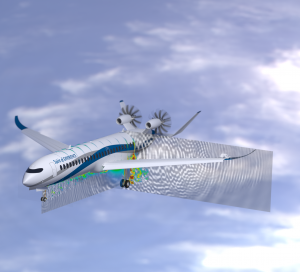 Traditionally, noise is evaluated during flight tests, a late phase in an aircraft’s development that’s usually associated with high costs and risks of late-design changes and potential delays. In physical tests, beamforming is used to measure the noise produced by the aircraft and to map it to different parts of the structure.

Simulation can accurately replicate these beamforming maps on a virtual aircraft long before a physical prototype is available for flight tests.

In addition, replicating beamforming maps using simulation can isolate different noise sources that would be invisible in measurements. Moreover, at some frequencies engine noise dominates the flight test data, swamping other noise sources. Simulation can remove the engine noise, revealing the contribution of decibels from other components, such as the sides of the flaps.

Even earlier in the development cycle, jet engine manufacturers can simulate the main source of excessive noise when components are being designed, allowing engineers to consider a range of noise-reduction concepts and choose the most desirable solution, saving time and money. This is a multidisciplinary undertaking involving trade-offs between aeroacoustics and other key performance indicators, such as weight and structural strength.

By comparing the results of simulations with and without different components such as nacelles, engineers were able to isolate the contributions of each part of the system at a significantly lower cost than physical testing. The results of these simulations were then used to guide the design of aircraft subsystems, such as the landing gear and flaps, and help designers meet noise-reduction targets.

Editor: To Learn More about reducing aircraft noise levels to mitigate concerns around increased air traffic, check out our e-Book on achieving quieter aircraft through simulation.