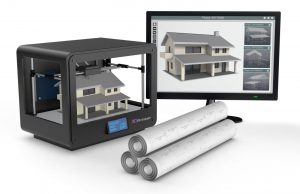 The notion of 3D printing a house isn’t a new one, of course. Additive Manufacturing is evolving in ways that, last year, weren’t conceivable. From printing plastics, to shoes, to skyscrapers, the advancements have been tremendous.

You’re probably aware that 3D printing typically calls for various types of plastics, but now metal is becoming more affordable and widely used in a variety of production tasks. Massachusetts-based startup Desktop Metal is one of the first to bring to market a 3D printer that is capable of printing small-scale metal objects. The company seeks to secure clients within the engineering world to alleviate much of the problems that arise from other materials. In September, Desktop Metal will launch the prototype and has swift plans to transition to a full-fledged production system by 2018. According to Forbes,

“Metal 3D printing is of particular interest to industries like aerospace, where the ability to manufacture low-volume, complicated parts enables the creation of better airplanes and rockets. About half of 3D printing service providers produce metal parts now; however, the current state of metal 3D printing is slow and expensive.”

Desktop Metal highlights its speedy process, which eliminates much of the post-production processing and review. Yet, the real hook comes in its price – $120,000 – which is 10 times less than what is readily available on the market.

Aside from the recent introduction of metal 3D printing, we’re seeing innovative uses for plastic materials as well. If you thought metal was the sturdiest ingredient – think again – MIT has just successfully test-fired the first entirely 3D-printed rocket motor that’s made with plastic casing. And if plastic rockets in space aren’t crazy enough, the university’s  giant mobile 3D printer can build a building in 14 hours, and some day it may be headed to Mars. CNN Tech reports that the “Digital Construction Platform” is,

“programmed to create a dome and use spray foam commonly used in buildings and homes. The whole system can be powered electrically or with solar panels. MIT researchers want to deploy their system in remote regions, such as in the developing world or in disaster relief areas…The long-term vision is for the system to work in places such as Antarctica, the moon and Mars to make buildings out of local materials like ice or moon dust.”

It may not be soon until we see condominiums up in space, but the technology is finally there to develop plans to inhabit planets in the future. Alongside MIT’s incredible advancements in 3D printing, another company is following suit with its Vending Machine Skyscraper. For more information on that story, visit the Forbes article to get the details.

With so many new products coming out of 3D printing plastic materials, it won’t take long for metal to take over the market and simplify the entire production process. We’re already seeing 3D car parts being printed, but soon, whole cars, boats, and skyscrapers can potentially become manufactured with sturdier materials.