The human heart is a magnificent creation. Much like a car engine, the heart is the motor that allows us to function. But for all the good things the heart does, it’s not the most reliable or toughest of organs. Heart disease is the leading cause of death around the world, it’s susceptible to blockages that lead to heart attacks, and worst of all it doesn’t heal itself or regenerate particularly well. Such a fragile yet critically important body part sometimes calls for a replacement, which are very hard to come by. Thanks to 3D printing however, heart transplants may become safer and easier to undergo.

Researchers at Carnegie Mellon University’s Regenerative Biomaterials and Therapeutics Group are “bioprinting,” or 3D printing using human tissue in order to create a functional prosthetic heart that, “has the potential to one day repair or ultimately replace a damaged heart.” 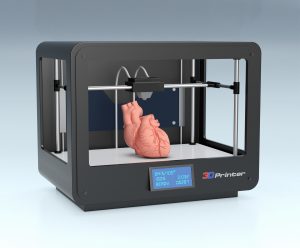 By 3D printing with proteins such as fibronectin, laminin, and collagen, the researchers constructed an extracellular matrix (ECM), essentially a set of scaffolding that scientists can use to regrow tissue. Getting this far is astounding from a scientific perspective given the challenges of bioprinting. To begin with, 3D printing utilizes hard materials, whereas bioprinting uses easily damaged soft materials. Another challenge they faced was getting these soft materials to stay in place and layer on top of each other during the printing process. To allow themselves to print layer by layer the researchers created the FRESH (Freeform Reversible Embedding of Suspended Hydrogels) technique where they printed soft biological material into a support gel to hold the structure in place. The support gel melts away after printing is complete, leaving behind the 3D printed structure.

A team of researchers in Switzerland led by Nicholas Cohrs are close to making 3D printed hearts a reality as well. Traditional models are made from separate parts, but this team opted to 3D-print their version for a more realistic model, allowing them to design silicon-based inner workings of the heart imitating the pumping function of the valves. This model is a significant achievement in 3D printing history, but is far from being a viable transplant option. In its current state, the model can only last for just over an hour, or a few thousand heartbeats, but the researchers are confident they will be able to develop long-lasting models for actual use. 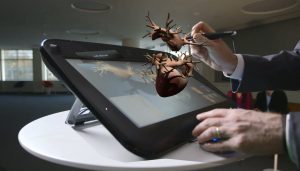 The research taking place at Carnegie Mellon and Switzerland are indicative of a larger healthcare trend: using 3D models to provide better outcomes and diagnoses. Dassault Systèmes is the catalyst behind “The Living Heart Project,” the purpose of which is to create a virtual models of the human heart. The goal of The Living Heart Project is to create 3D virtually simulated models of the heart that are realistic enough for researchers and doctors to use to learn more about the human heart in order to develop new techniques and treatments for the astounding number of rare defects and diseases that affect them. Our research agreements with the FDA and numerous academic and research institutions around the world are a testament to the enormous importance scientists and doctors place on improving the longevity of the human heart.

We are a long way from successfully 3D printing a functional human heart, however the speed at which researchers have been able to innovate and advance bioprinting is certainly cause for optimism. 3D printing and virtual simulation are the future of the healthcare industry. The synthesis between doctors and engineers on projects such as these will save millions as lives while ushering in unprecedented advancements in medical technology in the process.