The New, The Next, The Never Before at SOLIDWORKS WORLD 2017

Imagine a triangle… one of the vertices has 5000 people from across geographies- engineers, users, industry leaders ready to share their stories, explore new ideas and learn latest in 3D Design; the other vertex has over 120 partners and sponsors showcasing their innovations in 3D Design; and the last vertex has a brand with over two decades of industry leadership in 3D design. If you join the three what you get is Dassault Systèmes SOLIDWORKS WORLD 2017 (#SWW17). As the event continue to grow bigger better and larger every year; SOLIDWORKS WORLD 2017 took us the through on what is called The New, The Next, The Never Before.

However, before we all experienced The New, The Next, The Never Before at SWW17 at the inauguration on Mon, Feb 6 at the Los Angeles Convention Center- there was more excitement around #SuperBowl2017. As the users assembled at the convention center for knowledge, learning and hands on experience; #SWW17 ensured they did not take away the excitement of #SuperBowl2017, Sunday, Feb 5, 2017. Thousands gathered with beers, wines, wings, pizzas and cheering for #Patriots and some for the #Falcons as Former President, George H W Bush tossed the coin in a memorable moment and an evening where history would be made. While eventually the Patriots had the better of Falcons with a 34-38 in an overtime period; however that evening set the stage for a grand SOLIDWORKS WORLD 2017 that were to follow for the next couple of days. 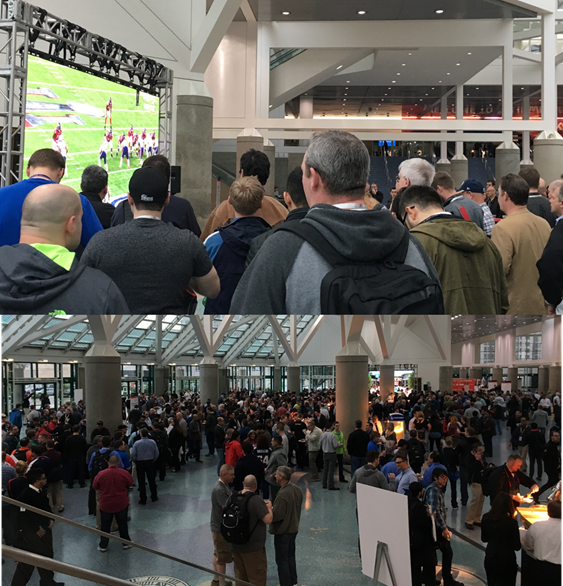 Gian Paolo Bassi, CEO, of the SOLIDWORKS brand at Dassault Systèmes took center stage amidst four giant curved digital signage (remarkable work by the events team). With #3DEXPERIENCE at the center and user experience being the focus; Magician Justin Flom and Tim Clothier, CEO and founder of Illusion Projects joined him on stage. The trio showed us on stage and in front 5000 eyes how magic happens. They debuted a new illusion- a track mounted buzzsaw where Gian Paolo stuck his head. As the saw sizzled though the platform all eyes were on it and it was pure magic that Gian Paolo emerged unharmed. It was the design that made the difference and that created the visual illusion. Addressing the audience he said, “I trusted my life with SOLIDWORKS, so you can trust us for your business”. “We challenge our limits” and what followed were some incredible experiences and amazing projects of robotics and Space X Hyperloop.  This was the beginning and what followed were incredible user experiences and narratives of the best in business- PRS Guitars, Augmented Reality (through partner Meta) and several others. 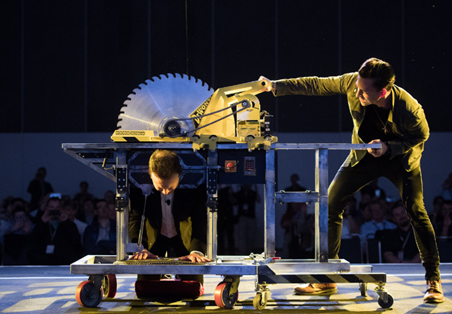 After an enthralling speech and demos by Gian Paolo, Monica Menghini, EVP, Chief Strategy Officer of Dassault Systèmes took the stage to discuss design in the age of experience. She spoke how sportswear maker Nike is transforming into a health and fitness provider; how Oral B is helping users improve oral health through tracking brushing habits. Bernard Charlès, Vice Chairman and CEO of Dassault Systèmes, then took the stage to discuss how with the 3DEXPERIENCE platform customers are designing amazing experiences in the cloud. He showcased 3DEXPERIENCECity and the Virtual Singapore project. He also spoke about several customers in Aerospace (Joby Aviation), Marine (Maritime Offshore Group) and AEC (Zahner), and how they are using the 3DEXPERIENCE platform and the power of cloud. 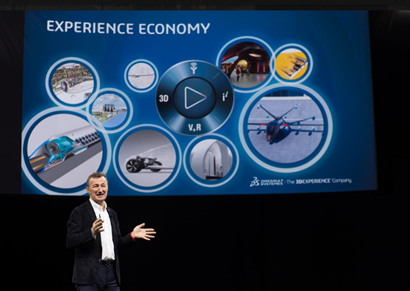 Post this Jason Silva, filmmaker and host of NatGeo’s Brain Games gave a talk on the future and that could be personal flying drones decongesting lives. The plenary session gave way to partner sessions, break-out sessions, brand sessions and industry roundtable for the next two days.

Day two was action packed with the highlight and first for SOLIDWORKS World being a combat robotics competition called the Robo Rumble! The rumble featured four teams: Fast Electric Robots, The Beaumonsters, Least Worst Robotics and Team Bad Kitty were all front and center, slugging it out for the crown. Each team is part of the National Robotics League, an organization dedicated to promoting interest in manufacturing careers. The three Robo Rumble rounds were fierce, but Team Fast Electric Robots won the day and the crown. 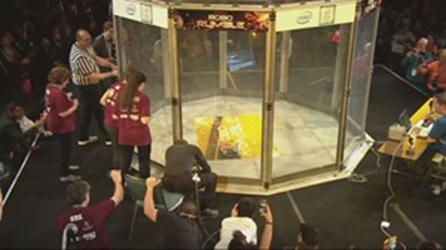 Another focus of SOLIDWORKS WORLD 2017 were the SWUGN Oscars Awards for User Leader of the Year, User Group of the Year and the Michelle Pillers Community Award. The SOLIDWORKS User Group Network (SWUGN) consists of 293 user groups in 38 countries dedicated to educating peers and providing networking opportunities for SOLIDWORKS users. 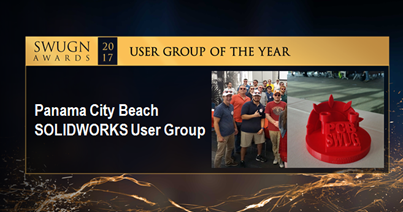 A key aspect of SOLIDWORKS WORLD 2017 is congregation of engineers, designers, marketers, technology enthusiasts and media. #SWW17 saw presence of over 120 media from across the globe who had arrived at #SWW17 ready to get a perspective on key industry hot topics viz Additive Manufacturing/3D Printing | Internet of Things (IoT) | The World of AR/VR | App for Kids. 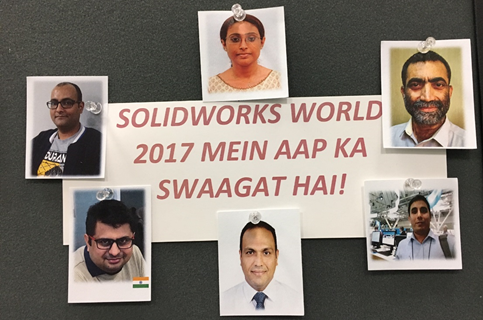 Mark Rushton, Portfolio Manager for SOLIDWORKS in his conversation with the Indian media spoke about how SOLIDWORKS has made it easy for several 3D printing companies to make formerly 3D printed molds viable for production with the process of Additive Manufacturing. “There are over 20 3D Printing companies who are our partners and have displayed their solution at the partner pavilion below including Stratasys, Carbon, Xometry, Renishaw and Ultimaker and several others.” The 3D printers displayed below had super-fast Carbon based production printers to the super strong continuous carbon fiber based composite printer to the new metal printer from Markforged. Alll of these could 3D print customized components parts of automobiles, aircrafts providing near similar strength but half the weight of traditional components. Partners like Stratasys announced the launch of its new F123™ printer series for 3D printing.

There were several spokespersons who spoke at large about the 3D printing and the opportunity they see in India. “We are bullish on India when it comes to training and nurturing young start-ups working in the 3D-printing space. We are willing to invest more in the country’s 3D ecosystem with opening up more training centres and bringing the young start-up community under our wings,” Suchit Jain, Vice President (Strategy and Business Development) for SOLIDWORKS at Dassault Systèmes. 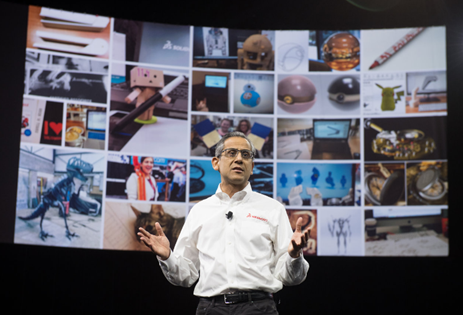 IoT is poised to be a USD 328 billion market by 2020 and India is expected to account for about 5% of this opportunity with the market poised to be USD 15 billion by 2020.  Emerging digitalization will bring in innovations across industries thereby catapulting the fast acceptance of the IoT. Adding to the company’s focus on 3D printing, Suchit Jain also added, “Not just 3D-printing and additive manufacturing, Dassault Systèmes is equally willing to help the Indian start-ups who are working in the field of Internet of Things (IoT) and its applications to build smart cities. Not only in smart transportation and smart lighting, for India, IoT will have more usability in health care and education. With the 3DEXPERIENCE platform, we are willing to help India build better IoT devices for smart cities,” Suchit Jain told Indian reporters at the group briefing.

One of the customer- Meta showcased an augmented reality solution displaying future factories and production processes. It was an exciting demo with journalists getting a feel of product design and components in a virtual environment of automobile production with the look and feel of the actual products. They were provided the demo of an International Space Station that was fun, interactive and knowledgeable. 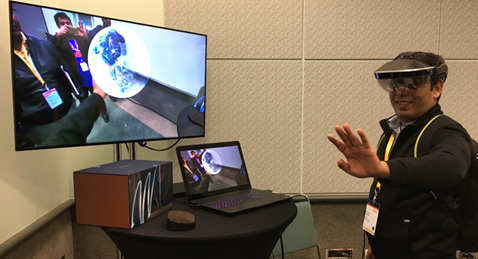 SOLIDWORKS WORLD 2017 was also about empowering children and their creativity. Working with South Korea based 3D printing company Sindoh, Dassault Systèmes SOLIDWORKS developed a SOLIDWORKS App for kids that translates their ideas into cloud enabled 3D printed physical designs anywhere in the world. This brings design more close to consumers and demystifies the technicalities associated with it.

Amidst 3 days of discussions, engagements, dialogues- the community also got an opportunity to experience the glitz and glamour at Paramount Studios of Hollywood in an evening on networking and getting to know each other. As Gian Paolo Bassi, CEO of the SOLIDWORKS brand summed the event as a family reunion, SOLIDWORKS WORLD will be back again next year as #SWW18 at the Los Angeles Convention Center from Feb 4-7, 2018 disrupting innovations in 3D printing, IoT and in industries of the future.