Certainly, one of my favorite features of Surpac is the ability to script and automate tasks using TCL. Using the record macro function allows for an easy way to loop and repeat a series of existing functions within Surpac, and can unlock a lot of potential for creative Surpac users.

Once we’ve mastered the ability manipulate the existing tools in Surpac using the within our macros, the next logical step to becoming a bonafide Surpac guru is to be able to create points, lines and triangles in the graphics workspace. In this post we will walk through the steps required to use TCL and SCL to create some new data into an existing layer in Surpac.

To start, let’s review the hierarchy of data in the Surpac workspace. 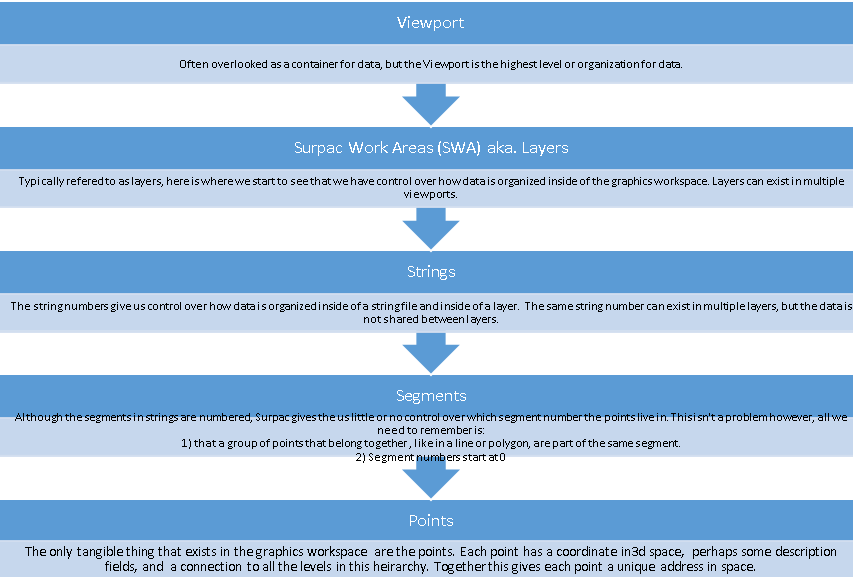 So, for a point to exist in the graphics workspace, it needs to have its complete address in the data hierarchy including Segment, String, Layer and Viewport. Let’s look at some the SCL commands we will need to know. Notice how the first 5 commands are related to the data hierarchy we just saw.

This function will create a TCL variable which contains the unique name of the viewport. In this case the variable is called “ViewportHandle” but you can use anything you like here, as long it is valid as the name of a variable in TCL.

This function will create another variable, “StringHandle” and requires us to specify the layer that the string is meant to exist in, as well as the layer and string number that we will assign to the points. This needs to be a positive integer, here I’m using string # 4.

Here’s where things get fun. The syntax here is identical to SclCreateString where we create another new variable called “SegmentHandle” and an argument that specifies the segment number, here I’ve used segment # 0. However, a problem arises if string 4 segment 0 already exists in the graphics workspace. To get around this I use another SCL command SclCountItems.

Combining these two functions gives us:

The syntax here follows the same as SclCreateSegment and we can also use SclCountItems here too.

The final thing we need to do is to tell Surpac to draw the new points on the screen. This can be done at any level of the hierarchy below Viewport, but I typically save the action of drawing, until I’m done making all of the contributions to the layer, and I will draw everything at once.

Let’s combine these functions into a simple example. 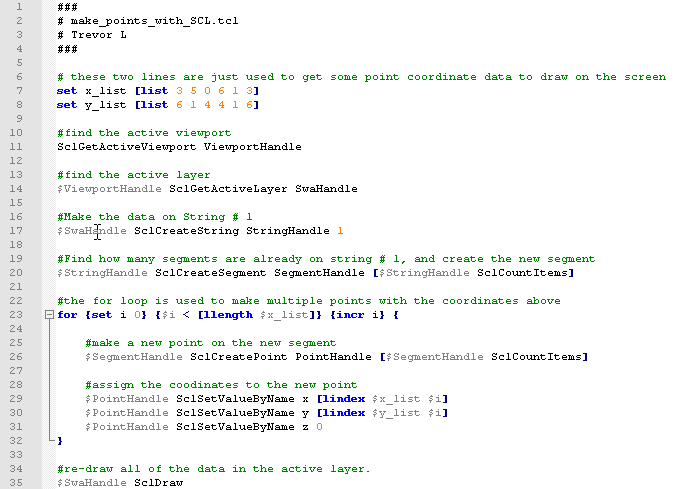 In addition to the functions discussed in this post, the example used several simple TCL commands. Information about these functions can be found by using the following links

Trevor is a Senior Mining Engineer at Dassault Systèmes, based in Vancouver Canada.