Have you ever felt overwhelmed with clothes in a tiny changing room?

Have you ever dream of  a store where you could try on outfits and matching accessories in various colors and styles without having to undress? Well, that kind of retail reality is just at the door. It’s a new technological viewing system and its name is the Magic Mirror. It will let you try on outfits… without taking your clothes off

No more queues in the fitting rooms… no more panic attack in cramped overheated changing areas: the Magic Mirror sounds like every consumers dream.

The magic mirror is not actually a real mirror. It is more like a giant computer screen (the size of a store mirror) that can be operated by gesture or touch. The system is linked to a computer and to several cameras that sit in front, above and to the sides of the customer. Images taken by the cameras are send to the computer which is instantly able to identify the size and gender of the customer.

The computer is then able to offer and suggest items that matches with the shopper body image.  The customer can then scroll through choices directly on the mirror, as they would do on a touch screen, or by gesture, like Microsoft Kinect. Customers can also pick any item off the shelves in a more traditional way and chip in the clothing tells the computer what style, size and color it is to allowed the shopper to virtually try it instantly. The mirror screens can also be used to display advertising that could change depending on the gender of the customer passing by.

The first Magic Mirror has been developed by British firm C-InStore, in early 2010. But as Duncan Clapman, C-InStore managing director, said “It is fun but it is certainly more than a novelty gimmick”. As a matter of fact, versions already available are not absolutely convincing yet. First, because it doesn’t really tell how an outfit feels next to the skin or how easy it is to get on, if the zip easy to operate or the buttons be easily reached. Second, the available collections “to try virtually” are still limited. 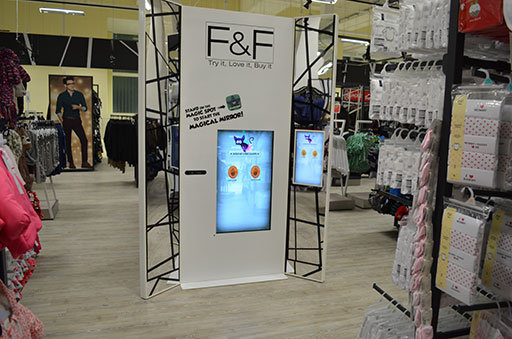 An interactive tool that has some real business benefits

However, this new technology is a bid by retailers to ensure consumers to keep going to shop in real stores rather to shopping online. Clapman adds “Magic Mirror is an interactive tool that has some real business benefits in terms of reducing waiting time for consumers who may be on their lunch break and need to get back to work. It has a particular appeal for men, who simply do not like the hassle of changing rooms and prefer to be in and out with the minimum of fuss. It has really captured the imagination of a number of retailers who are talking to us about installing this new generation of shopping experience.’

Share the post "The magic mirror: Screen lets you try on outfits… without taking your clothes off"

Know More “The Book of the Week” Each week, FashionLab’s edito