An international team of scientists have developed the world’s first flexible fiber-optic solar cell. The silicon-based fibers are thinner than an average human hair, flexible and have been conceived to be scalable to many meters in length. Many attempts have been made in the past to integrate photovoltaic technology into flexible fabrics but average components were too rigid and unyielding. The research, led by John Badding, a professor of chemistry at Pennsylvania State University opens the door to the possibility of weaving together solar-cell silicon wires to create flexible, curved, or twisted solar fabrics that will be capable of converting solar radiation into direct-current electricity.

“Our goal is to extend high-performance electronic and solar-cell function to longer lengths and to more flexible forms. We already have made meters-long fibers but, in principle, our team’s new method could be used to create bendable silicon solar-cell fibers of over 10 meters in length,” Badding said. “Long, fiber-based solar cells give us the potential to do something we couldn’t really do before: We can take the silicon fibers and weave them together into a fabric with a wide range of applications such as power generation, battery charging, chemical sensing, and biomedical devices.” 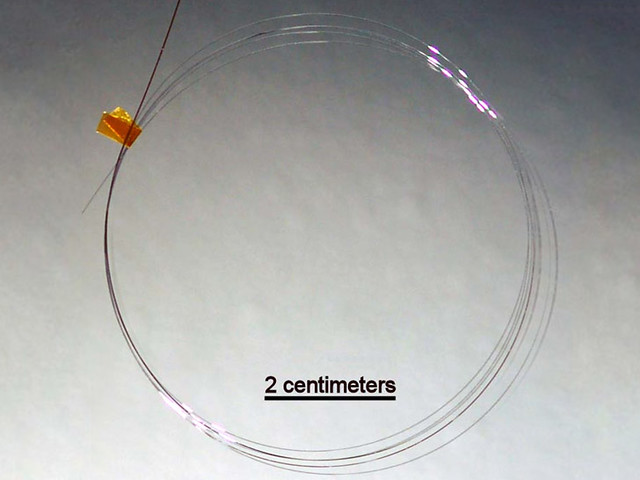 A coiled strand of a meter-long solar-cell junction fiber, thinner than the width of a human hair, which has been created by a team of chemists, physicists, and engineers led by John Badding at Penn State University. Credit: Badding lab, Penn State

One of the major limitations of portable electronics is short battery life. Solar-boosted batteries could help solve this problem

Badding explained “A solar cell is usually made from a glass or plastic substrate onto which hydrogenated amorphous silicon has been grown, such a solar cell is created using an expensive piece of equipment called a PECVD reactor and the end result is something flat with little flexibility. But woven, fiber-based solar cells would be lightweight, flexible configurations that are portable, foldable, and even wearable.” This material could then be connected to electronic devices to power them and charge their batteries. “The military especially is interested in designing wearable power sources for soldiers in the field,” Badding added.

The Badding’s team members also believe that another advantage of flexibility of their materials is the possibility of collecting light energy at different angles. “A typical solar cell has only one flat surface,” Badding says. “But a flexible, curved solar-cell fabric would not be as dependent upon where the light is coming from or where the sun is in the horizon and the time of day.”

To learn more about the first Flexible Fiber-Optic Solar Cell access to the press release here.