« Social Media are eventually made for you », Professor Christian Dussart proposed on November 6th a journey through this communication channel, focusing on return on investments for companies.

Up to 1500% return on investment… a compelling title!

But, who are those companies that success at managing the art of new social on the Internet? What are the rules and best practices?

Professor Dussart, ranked among the four best marketing teachers in the world, according to the Society of Marketing Advances, answered all those questions for the HEC Montreal Alumni group.

Demonstrating the strength and relevance of those networks, HEC teacher C. Dussart demystified the use of digital to acquire fans and new prospects, but also to create and maintain a relation with them, based on their engagement towards the brand or enterprise. According to him, the eventual complexity of social media management deters from investing internally and drives very disordered communication strategies. Nonetheless, looking at the best campaigns done so far, several rationalities appear; iterative and efficient, those social media rules are necessary to establish a viable and profitable plan.

Professor Dussart took the example of Dassault Systemes for using an incremental and holistic method throughout all their social platforms. He mentioned for instance the challenge “IF WE”, launched to create a social conversation around dreams that could help change the world in a positive way.

Out of the numerous lessons Mr. Dussart shared that night, the “Donut” rule was my favorite (cf. image). All canals do not aim to address the same audience and are certainly not based upon the same structures. 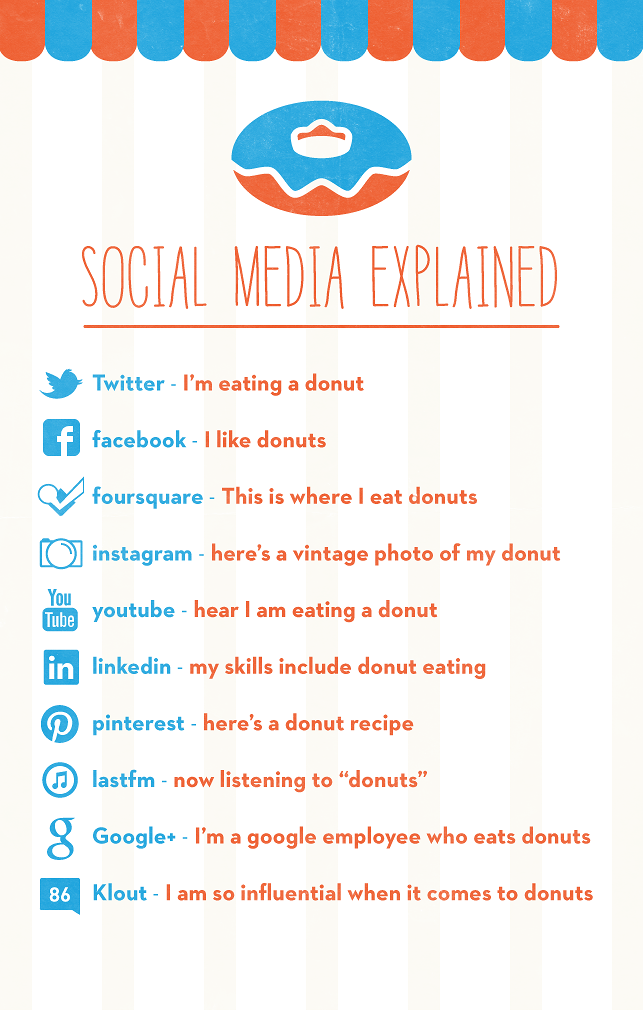 In terms of ROI, Professor Dussart took the example of the maritime transportation company MAERSK. Through their very systemic approach, using each social platform with a specific aim and addressing their followers with a different tone of voice, the containers company raised its likes on Facebook up to 2 million. Although, the project was initiated with a short amount of money: a 100k€ budget. The impact of « likes » for the company’s sales has later been estimated to up to 9,5% increase. As a conclusion, Professor Dussart summed up this bright exercise with four strategic pillars : share, engage, convert and retain.

To conclude, social media are empty windows opened to the exterior world. A company can choose to use them to showcase information that they’re keen on sharing with everyone, to spread the word. Taking into account the Pareto Law, only 20% of the content shared should actually be related to the company’s direct activities. This concept goes together with the forward-thought of social sharing (crowd-sourcing) and the relevance of “earned media”, growing with the importance of social media. It is a way to raise desirability for users and to position the company as a trustworthy influencer.