This ‘tactile helmet’, developed by researchers at the University of Sheffield, could provide vital information to firefighters operating in hard conditions and could give important clues about their surroundings.

Inspired by research into tactile sensing in rodents

The helmet was Invented by a team of researchers at the Sheffield Centre for Robotics (SCentRo). Its technology was inspired by research into tactile sensing in rodents. Actually, the whole system works like mouse whiskers that give early warning of potential hazards.  The gear is fitted with ultrasound sensors that are used to detect the distances between the helmet and nearby walls or other obstacles. The signals emitted by the sensors are transmitted to vibration pads that are attached to the inside of the helmet, touching the wearer’s forehead. Rescue workers, such as fire-fighters, who might be working by feeling in dark or smoky/dusty conditions, will be able to use the signals to find landmarks such as walls and other obstacles that could help guide them through unknown environments.

Professor Tony Prescott of the University of Sheffield and director of SCentRo, said: “When a firefighter is responding to an emergency situation he will be using his eyes and ears to make sense of his environment, trying to make out objects in a smoke filled room, for example, or straining to hear sounds from people who might need rescuing. We found that in these circumstances it was difficult to process additional information through these senses. Using the sense of touch, however, we were able to deliver additional information effectively.” 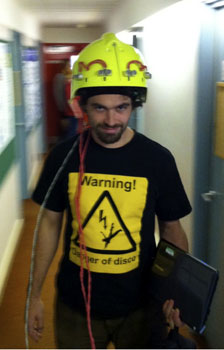 the sensory fire helmet in action

This technology could also be useful to people with visual impairments

The team also found that the helmet was the ideal place to locate the vibrating pads because, “although the fingertips might seem a more obvious choice, stimuli delivered to the wearer’s forehead enabled them to respond more rapidly to the signals, and would also leave their hands free for other tasks”. A lightweight version of this technology could also be useful to people with visual impairments. The system could then act like an additional ‘sense’ to guide users or to help them avoid obstacles.

The prototype helmet was developed using a Rosenbauer helmet donated by Northfire Ltd and was produced following a two-year research project, funded by the Engineering and Physical Sciences Research Council. South Yorkshire Fire and Rescue Service have also assisted, providing advice during the development period as well as access to their training facility. The next step is to find a commercial partner interested in further developing the helmet.

Via: Sheffield Centre for Robotics

Know More “The consumer’s experience in the digital era: FashionLab in the s