FashionLab just attended Attitude STHLM, one of the most important fashion event in the Nordics. It took place from Nov. 23 to 25 in Kista Mässan, Stockholm.

FashionLab gave a Round Table debate around the future of Fashion design tools on Friday Nov. 23rd, and participated in Attitude Gala Dinner on Saturday Nov. 24th, in the City Hall (Stadhuset).

Debate about the future of fashion design

Jean Paul CAUVIN was the moderator of this session and introduces the debate by giving , more background information about fashion design. Fashion started with craftsmanship and expertise that is today reflected in the Haute Couture area. But garments became more and more normalized with the appearance of ready to wear. Today we are going back to more personalized garments to fit each of us personality. 3D design tools will help create new possibilities for fashion design.

Jerome BERGERET joined Mister Cauvin on stage and explained how 3D could solve a lot of fashion challenges today and that a revolution has started. FashionLab mission is to create next generation of software. FashionLab is working on tools that help designers imagine the fashion world of tomorrow better and faster, bringing them closer to their clients.

Julien FOURNIE then joined the debate and shared his experience with FashionLab and how he experiments these future solutions, especially on the design part, in context of his Couture Collection. Julien explained that he is meeting with Dassault Systèmes engineers frequently to work on improving the solutions.

Last but not least we had the honor to welcome Cay BOND on stage, the most influent fashion and trends journalists in Sweden and in the Nordics, to discuss about the future possibilities for the designers and also the link with consumers especially in the Nordics countries. The most important being the women attitude. 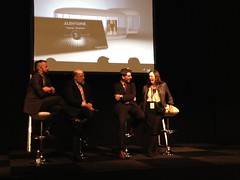 Gala dinner in the Prestigious Stadhuset

FashionLab attended Attitude STHLM Gala dinner on Saturday Nov. 24th in the wonderful Stadhuset – Stockholm City Hall – where Nobel Prices are distributed each year. During this dinner, more than two hundred people attended, among other, key people from the Fashion world and influencers. Where there: it was definitely THE place to be!

The first fashion show started with Ida Sjöstedt. Ida is a Swedish fashion designer. She graduated in 2000 from London’s University of Westminster. She set-up her own label in Stockholm the following year. Since then, Ida has become one of Sweden’s most popular designers, combining ready to wear collection with couture dresses for privates customers, and with an ever growing following crowd who love her signature style of tasteful kitsch.

The second fashion show showcased another Swedish designer. Lars Wallin is a couture designer renowned for his beautiful signature design, working only in the finest material available. Dressing artists, celebrities and royalty, Lars Wallin in continuously working on new couture. He is also making a leather jacket collection in partnership with Jofama and a bed linen collection with Carpe Diem Beds of Sweden. Lars has also his own make up collection called: Make it your Own.

Last but not least: Julien Fournié, the Guest of Honor of Attitude STHLM event, launched his Fashion show.

About Julien Fournie: After he had interned with fashion houses like Christian Dior and Givenchy, after he had assisted Jean Paul Gaultier and Claude Montana, after he had been named the creative director of the houses of Torrente and Ramosport, the next natural step for Julien Fournié was to launch his own fashion house in 2009. Today, Julien Fournié is one of the extremely few fashion designers who have met the criteria to be elected a “guest member” in the prestigious Chambre Syndicale de la Haute Couture official calendar most prestigious runway shows in Paris. In this first Haute Couture show as a guest member of Chambre Syndicale de la haute Couture, Fournié chose to present his creations exclusively on black models, something considered ground breaking in the fashion world. 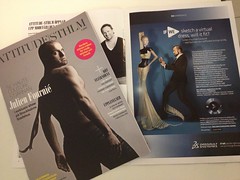 Know More ‘Aposematic Jacket’ is a camera apparel designed for self-