Today, January 26th 2016, at 4pm Paris-France time, Julien Fournié will introduce the Couture Spring-Summer 2016 Collection “First Paradise” on the runway, at the occasion of the Paris Haute Couture Fashion Week. 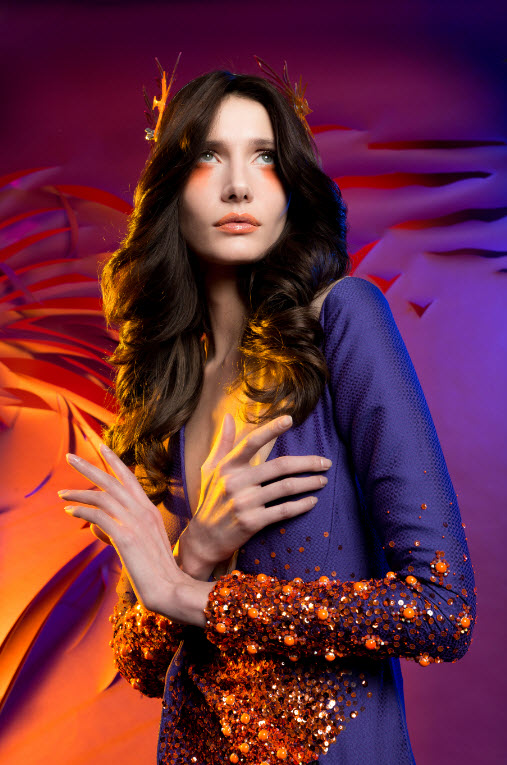 “The soothing rhythm of waves on a sandy beach yields to the enchantment of the melodies
composed by John Barry for adventure movies. Clove, amber, vetiver spread their spell and
announce tropical shores: Julien Fournié has transformed the nave at the Oratoire du Louvre
into a vessel sailing on the waters of a fictional ocean approaching a fashion Eden, full of
mystery and voluptuousness.

On these shores, the elegance of the female residents is first sketched in a cooling print on
white linen: large tropical flowers in watercolor are framed in a charmingly fitted cocktail
dress. The following ultra-fitted pants are worn with a draped jacket in a papaya shade. The
range of colors drawn from vivid pinks are thus driven to soft oranges. Fournié dares the entire
palette of oceanic rainforest fruits and blossoms : from saturated dragon fruit pink to
mangustan deep purple or the intense green of philodendron leaves, the designer also
focuses on the various shades of strelitzia, hibiscus and lagoon reflections.
With opulent hair, worthy of the most charming adventure movies heroines of the 1960s and
1970s, the Fournié protagonists could have favored as role models Jacklyn Smith (Charlie’s
Angels) or Jaqueline Bisset (The Deep). Wearing denim pieces is allowed on their tropical
island, as long as they are carved with cuts to flatter femininity. Similarly, the removable
shape of a jacket “basque” on a denim or lagoon brocade riding-coat, returns attached this
time to a fuchsia crepe sheath in matching fabric. This is not the only allusion to tailoring in the
art of dress-making. On several occasions, the couturier creates a double fold on the back of
the neck and on the bust to include the tricks of tailored jackets into spectacular evening
gowns.

Jacquards and 3D embroidery also make this fashion statement contemporary. Inspired by
Asian blooms in a fragmented vision, the two-dimensional graphic motifs in original color
pairings are enhanced with three-dimensional coordinated metallic embroidery. These
embellishments substitute, for the season only, the designer’s oversize necklaces. Birds of
paradise flowers and leaves, reshaped in fabric or matte glass beads come here and there to
adorn the outfits. Until the final wedding dress appears on the runway: cut in the same printed
linen with orchids and palms as the opening number, it offers an ample volume. Worn with an
entirely embroiders coordinated bolero, the form-fitting top shines with sheer sequins for a
cooling dew effect and spikes with crystal clear craftsmanship.

Standouts also include :
– In terms of style: Purple high-waisted gaucho pants worn with a fluid blouse in the color of
guava.
– In terms of lightness: A black “ruché” short skirt with a light knitted intarsia top featuring a
philodendron leaf motif.
– In terms of opulence: two evening dresses entirely covered with Sophie Hallette
embroidered lace. the clash of colors in the first sheath hints at African tradition, while the
second gown displays a graphic embellishments inspired by fireworks.
– In terms of silhouette: two form-fitting sheaths seem to wrap around the body with a set of
172 buttons. Here lies the secret : no seams in these dresses which have adopted the “orange
peel” process to follow body curves

Graphic prints from lush rainforests and embroideries of cat’s eyes will appeal to ladies
favoring colors in ultra-chic tones.

They travel both in the first 15 ready-to-wear luxury looks
and in the 17 following Couture gowns.

Available on the day after the show for the first set in
selected boutiques, and in the house’s Couture salon for the second set, the collection
creates a privileged relationship between luxury ready-to-wear and Couture, a link between
models and customers, a bridge between runway and retail.”