FashionLab was recently launched in Sweden, in the Netherlands and in Germany, via some press conferences.

After the UK and Italy beginning of the year, we continued our press trip in Stockholm, at our PR agency’s – AxiCom. 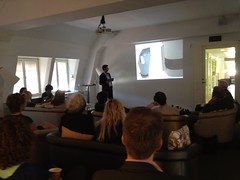 Then we did a press conference in Amsterdam, in a very nice place named ‘Cool Brands house’. Very trendy and smart!

Last but not least we launched the FashionLab in Germany, in Frankfurt, where Julien Fournié attended to give a testimony.

Thanks to these press activities we have been very present in the media in Europe. We have created our scoop.it account almost one year ago where you could read FashionLab related articles.

In parallel we did many events, we attended and speak at different conferences in Paris, but also in Europe and in the US.

The FashionLab was officially launched last year in November 2011 in NYC, and since then, we traveled in London, Milan, Stockholm, Amsterdam, Frankfurt for press activities and also in Paris, Brussels, in the US, and not so long ago in Singapour for the Fashion week… But that was just a beginning!

FashionLab will be this week in Prague for another Press conference! We will be welcomed by Galerie/CZD, ran by Czechdesign magazine. And we are also preparing our 2013 activities…

Know More “The Book of the Week” Each week, FashionLab’s edito

Know More Stronger, lighter, safer, smarter :  these are the textiles of tomorr