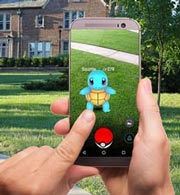 With Pokémon Go, augmented reality for gaming may have found its killer app. Gamers must locate, capture and battle Pokémon creatures that appear in their real-life environment.

You have probably heard of virtual reality (VR) and augmented reality (AR). But what is the difference?

Virtual reality creates a virtual world that users can interact with. The experience is immersive, thanks to the realistic simulation of vision and hearing. The applications of virtual reality are mainly found in gaming, entertainment and simulation. Virtual reality devices do not allow you to see the external world.

Augmented reality expands the real world with virtual artifacts, showing how you look with these beautiful earrings or highlighting the oil drain plug in your car engine. Augmented reality devices are see-through devices, with the potential to add virtual objects.

For its part, the Pokémon Go app only relies on smart phone geo-location capabilities and camera to display flat Pokémons on top of real-life surroundings, sometimes with unrealistic results. This is why some consider Pokémon Go as a location-based game, and not as a true augmented reality app.

While VR is primarily for the entertainment market, business applications will drive a large part of the AR market, including industrial applications. The following scenarios within manufacturing are ideal and it will take time before they become common practice in the industry.

In most of these applications, integration with a PLM parts database as well as with various manufacturing processes (work instructions, quality, warehouse management, people skills management), is highly desirable. Coherence between 3D models (products, assets and factories) and manufacturing operations is also required.

The benefits of AR for work instructions (our first scenario) were estimated by a Boeing study in 2014-2015. About 50 participants had to accomplish a series of tasks that were representative of a typical assembly process at Boeing. They were divided in 3 groups:

Boeing measured the median number of assembly errors for first-time assembly (training) and for final assembly:

Other qualitative benefits can be deduced from the scenarios above:  better and quicker training thanks to hands-on realistic experience, best practices captured from highly skilled users, reduced need for travel to the job site thanks to remote assistance, quicker warehouse picking with less errors, and a faster, more confident path to an optimal factory layout.

…But adoption rate is still slow

Given all the benefits above, one could expect to find a lot of testimonies of AR usage in the industry. But in fact, while many companies experiment with AR, it is difficult to find articles describing advanced AR implementations beyond pilot projects.

Lockheed-Martin has communicated about the use of AR for assembly and repair of the F-35, allowing engineers to work 30% faster, according to the company that built the software. But this still appears to be a trial.

At Volkswagen’s Wolfsburg plant, the deployment of smart glasses for order picking has started with 30 employees. However, the AR usage appears pretty simple, with glasses used as barcode readers and to display storage locations and part numbers directly in the field of vision, allowing workers to work hands-free.

BMW has shared a great video of a mechanic repairing a car engine with an overlay of virtual parts upon real ones, and in-context animations. But the video was released in 2007, and augmented reality is nowhere to be found on the BMW corporate Web site at the time this article was written.

It is worth noting that AR first appeared in Gartner’s technology hype cycle in 2004. More than 10 years later, AR is still in the “trough of disillusionment” section of the 2015 curve and mainstream adoption will not occur for 5 to 10 years, according to Gartner.

This is because AR requires a lot of advanced technologies and some of them are still maturing. Areas of much needed improvement include:

How elaborate will your AR application be?

Does this mean that industries have to wait the 5 to 10 years for the technology to be mature, as estimated by Gartner?

Well, it depends on the kind of AR app we are talking about. We can identify 4 levels of sophistication for AR apps, as shown in the figure below:

What is the situation today?

According to Patrick Ryan from Index AR Solutions, the quality control, assembly and training applications are the most mature applications of AR. Assuming industrials target the low-hanging fruit, we can expect in the short term to hear more stories of location-based AR applications in these domains – even though some say this is not AR!

But, for Pokémon Go, who cares?

If you liked this article, here is another you might also find interesting:

[1] For example, to project a digital jig to stud welding.

[2] Assembly time measurements also showed a reduction of the build time, though not in the same proportion.

[3] Otherwise, the experience will not feel authentic and simulator sickness will likely occur