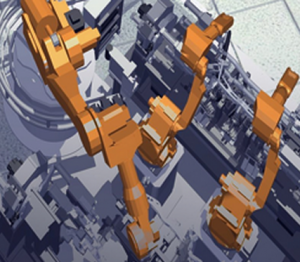 When you think of the factory of the future, what do you envision? The manufacturing pundits often conjure up images of a world where robots roam freely around sterile factories that operate 24×7 with no human interaction. Or, perhaps there is no production floor at all, as additive technology, otherwise known as 3D printing, moves from just producing prototypes to a direct digital manufacturing (DDM) model in which the printer can output final production parts. And as of earlier this year, the concept has been extended into a realm that includes parts that assemble themselves or 4D printing.

If these scenarios seem too 22nd century to you, think again. Robots have been moving around manufacturing shop floors for years in the form of AGV’s (Automated Guided Vehicles), and the idea of going directly from a CAD model into fused deposition modeling (the process of layering liquefied plastic or metal through a thin filament that forms into the desired shape as it hardens),  is a reality today.  Variations of the technology are being used by dental supply company Invisalign, which leverages stereolithography– liquid UV-curable photopolymer resin and a UV laser– to build its retainer product parts one layer at a time.

While robots are working side-by-side with their human counterparts, and DDM is shifting the production paradigm for small metal and plastic products, don’t expect the present plant floor model to disappear.  Global manufacturers in the aerospace, automotive, milling, food & beverage, and life sciences industries are invested in multi-site manufacturing operations management strategies that can’t be replaced by a robot and a 3D printer. But these companies can benefit from digital factory technology, especially as they look for ways to tighten up their Three Platform IT Strategy of planning (ERP), design (PLM) and execution (MES).

For years, manufacturers, software vendors and automation groups have been trying to find a way to create a closed-loop system that provides the engineer, plant manager, and equipment operator as well as IT, with the same product information and visibility across processes. As an industry, we’ve developed standards, such as ISA-95, which provides data models and terminology for mapping out the integration of enterprise and control systems. But we need more ways to fill the gaps to streamline efficiency, increase quality, and boost productivity. Despite the incredible technology breakthroughs that are currently in place or coming down the pike, the need for engineering to speak with execution and planning is not going away.

Digital Tools, Beyond the Hype Cycle

While Gartner’s 2012 Emerging Technologies Hype Cycle graph has 3D printing at its “peak of inflated expectations” in the next 5 to 10 years, digital manufacturing tools are past the hype and already in production at companies like General Motors where they are used to create  virtual validation builds, for example. The company can digitally prototype plant layouts, material flow, production lines, workstations, and work assignments. Here, there is a distinct closed-loop process between design and planning. Execution, however, is still a bit tricky.

Laying out work cells are one thing, designing and producing a product is another. And, the data used for each process is very different. Product design files are fluid models that continually change, while plant floor models comprise more rigid mechanical, electrical, and control capabilities built for motor output, energy input, and equipment movement.  It’s difficult to define a common standard that allows for seamless integration from design to execution.

But, as noted in Olivier Drean’s blog post “Working with the White Space,” the underlying architecture can be the channel for change. Geared more toward business processes, there is still work to be done around a unified communication protocol to coordinate design and engineering data with manufacturing execution systems. Perhaps we’re not there yet. But we, as an industry, are getting closer to collaborating and pulling the platforms together so that the factory of the near future is a much more productive place – even without the robots or the 3D printers.