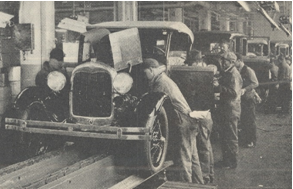 In 1913, Henry Ford revolutionized the world of mass production with his conveyor belt assembly line. It’s been 100 years now and the conveyor belt is more a part of our industrial landscape than ever. In fact, we’re now using conveyors in ways Ford never imagined.

The Beginnings of the Conveyor Belt

Ford wasn’t the first to use conveyor belts for industry. In the late 18th Century, primitive conveyors with canvas or leather belts were being used in mines and rail yards to handle bulk materials over short distances. But it was Ford’s assembly line process that changed mass production forever. Along with interchangeable parts, this process greatly sped up the assembly of individual units, making it possible for Ford to produce cars faster and more cheaply than had ever been done before.

This process has been replicated in every mass production facility in the world. And though technology has improved, the basic principles of the assembly line that Ford implemented in 1913 haven’t changed.

Today’s assembly line still consists of a conveyor and stations where specific tasks are completed. But modern technology has improved speed and precision beyond anything Ford dreamed of.

Today’s world markets for cars and other manufactured goods are more demanding than ever before, and this requires assembly lines to be more efficient than ever. Now-a-days, specialized machines do much of the work along assembly lines depending on the products being manufactured. Computerization and laser guidance systems have made many of these robotic workers faster, cheaper, smaller, and more precise than human counterparts. Of course we haven’t figured out how to do build robots for every task, and people are still essential for fabrication, quality assurance, and sorting along many assembly lines.

The efficiency of a manufacturing process requires a great deal of logistical coordination and adaptability. Components for building an average automobile might originate in factories all over the world. Many of these factories have become so versatile that they can completely retool from manufacturing one product to the next one in a matter of weeks. As many aspects of production change, conveyor belts are ubiquitous in mass production processes.

A conveyor belt is a simple, but incredibly versatile machine. New innovations have made this tool highly adaptable for a wide variety of tasks. For this reason, conveyors are widely used in agriculture, mining, manufacturing, recycling, pharmaceutical, food processing, and many other industries.

Moving bulk materials for commercial use is a job conveyors have done for hundreds of years, but not like today. Modern conveyor belts are made from homogeneously molded rubber compounds that last three to five times longer than traditional laminated rubber belts. The various rubber compounds used can make the belts oil, heat, or flame resistant or increase conductivity for vastly different manufacturing conditions. Flexible sidewalls and innovative cleat designs have greatly increased the load capacity of belts even along steep inclines.

Modern conveyors designed for sorting packaged goods are capable of sensing the positions of objects and rotating and aligning them for processing and shipping. Some belts can electronically identify objects and divert individual packages to different destinations without human oversight.

100 years after Ford perfected his assembly line, conveyor belts are essential parts of mass manufacturing throughout the world. The simple design is versatile enough to adapt to an incredibly wide range of tasks. As new technologies come and innovations improve efficiency even more, it’s likely that these machines will continue to be valuable tools in industry. This is because, barring a Star Trek style dematerializing transporter, it’s difficult to conceive a more efficient way to move material and products along the production line than a conveyor belt.

Matthew can be found on Google+.